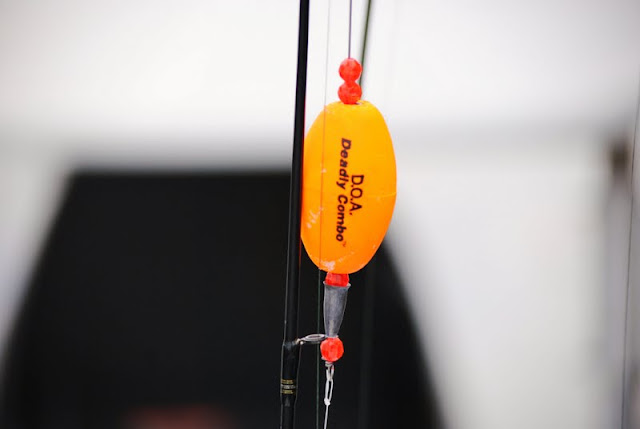 Last month it was the Zara Spook, but lately DOA's Deadly Combo has been crushing the trout for me.  It's a really effective system combining the noisy float and rattle that you see in the photo with a DOA Shrimp trailing underneath it.  All you need to do reel and twitch and the come running.  It's also very effective on weed covered flats since the lure itself rides a few inches under the surface.  This is nothing more than an upgrade of the proven popping cork/live shrimp combo that has worked so well all over Florida. Unfortunately, live shrimp wind up catching a lot of things that you don't want, like catfish, and The DOA Deadly Combo rarely does.  You can pick them up for around $8 so get two.
Posted by Capt. Gregg at 1:46 PM

Email ThisBlogThis!Share to TwitterShare to FacebookShare to Pinterest
Labels: Pine Island, sea trout
Newer Post Older Post Home
Welcome to the Pine Island Angler. This blog is published from my home base on beautiful Matlacha, Florida where I run my guiding business Wildfly Charters. I started this site to provide regularly updated news about salt water flats fishing throughout Southwest Florida, the Keys, and many other Stateside and Caribbean locations. As a full time guide since 1995 I'm always looking for that next undiscovered spot or secret fly that will lead me to even better fishing and I'm happy to share what I find here on this site. I welcome any of your comments on all of my posts. Feel free to contact me with any questions by e-mail at gmckee1@hotmail.com or call me directly at (239)565-2960. Capt. Gregg McKee