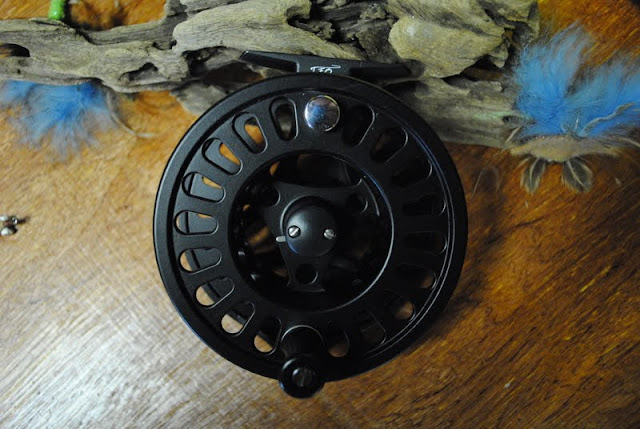 Don't call Temple Fork's Prism fly reels cheap.  That makes them sound poorly made, and they're not.  They only cost between $85 to $100 so call them inexpensive instead.  I just picked one of these up to use with my 9-wt BVK fly rod and it's a really nice combo.  The Prism reels are made from cast aluminum which means they're poured into a mold which makes them very easy to produce.  Higher end reels, like my favorite Tibors, are machined from solid bar stock aluminum, making them much more pricey.

But don't get hung up on using a cast aluminum reel for saltwater fly fishing.  Most of them are up to the task, especially the TFOs.  The Prisms have large cork drags and a one way clutch making them more than capable of stopping a hard pulling redfish or snook.  They can also pack a lot of backing, over 250 yards for the 9/11 model, which is a must for chasing big tarpon.

I do recommend taking a little more care to rise cast aluminum reels off with warm water each time you use them.  Most anglers do this anyway but if you're like me, rods and reels get left in the boat for days between washings.  This has never bother my bar stock Tibors but you'll notice a bit of pitting after a while if you leave salt on cast aluminum reels.

You can take a look at the new Prisms locally at Florida Paddlesports.  They're more than enough reel for anything that swims around the flats of SW Florida.

Email ThisBlogThis!Share to TwitterShare to FacebookShare to Pinterest
Labels: fly fishing, TFO
Newer Post Older Post Home
Welcome to the Pine Island Angler. This blog is published from my home base on beautiful Matlacha, Florida where I run my guiding business Wildfly Charters. I started this site to provide regularly updated news about salt water flats fishing throughout Southwest Florida, the Keys, and many other Stateside and Caribbean locations. As a full time guide since 1995 I'm always looking for that next undiscovered spot or secret fly that will lead me to even better fishing and I'm happy to share what I find here on this site. I welcome any of your comments on all of my posts. Feel free to contact me with any questions by e-mail at gmckee1@hotmail.com or call me directly at (239)565-2960. Capt. Gregg McKee