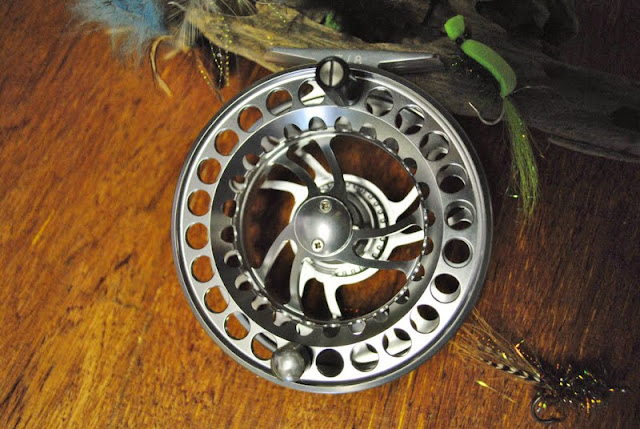 Temple Fork's new BVK 7/8 fly reel is 5.2 ounces of perfection at only $250.  I got to handle one for the first time yesterday and purchased it immediately.  Just like their amazing BVK fly rods, this is another product where TFO could be charging twice the price and still sell them by the ton.

For starters, just look at the design of this reel.  It's like Leonardo DaVinci meets Caroll Shelby and they both go bonefishing with Lefty Kreh.  The BVK is absolutely beautiful.  It's machined from bar stock aluminum and the spool is ported in 96 places to reduce weight but not loose any strength.  The BVK's frame, which looks like the wheel of an Orange County Chopper, holds drag system which is sealed and maintence free.  The drag's adjustment nut on the frame's backside could be a little bigger since I found my fingers slipping as I cranked it to full throttle.  This is my only gripe about the reel and it's an insignificant one at that.


The drag itself is basically two small discs, one stainless steel and the other made of DuPont's Delrin plastic.  It's incredibly smooth to engage and has a great sounding click.  I'm a sucker for a nice sounding drag and I've bought other more expensive fly reels in the past totally based on that.  The BVK's drag is pure music and a big Key West bonefish would make it sound like the E Street Band on the deck of your flats boat.

When I started saltwater fly fishing almost 20 years ago this type of reel did not exist.  A Fin Nor Ahab was my first saltwater reel and I paid $380 for it, a fortune to me back then.  It had a narrow spool with a small arbor and a thin cork drag that could never be tightened down enough.  It's been hanging on my wall for almost ten years now because at 9.2 ounces, more than half a pound, Homeland Security won't let me have it in my carry-on bag.  My old Fin Nor is so heavy that I could literally use it to smash someone's skull, so it made the No-Fly list.


That's not the case with the BVK reel.  It's as light and unobtrusive in your luggage as it is mounted to a fly rod.  And I really recommend pairing it up with one of TFO's BVK rods.  Strung up with a quality fly line and 200 yards of backing you'll have a $600 combo that's better than anything available just a few years ago.  They're available right now at Florida Paddlesports if you're in the Cape Coral area and want to play with one.

Email ThisBlogThis!Share to TwitterShare to FacebookShare to Pinterest
Labels: fly reels, TFO
Newer Post Older Post Home
Welcome to the Pine Island Angler. This blog is published from my home base on beautiful Matlacha, Florida where I run my guiding business Wildfly Charters. I started this site to provide regularly updated news about salt water flats fishing throughout Southwest Florida, the Keys, and many other Stateside and Caribbean locations. As a full time guide since 1995 I'm always looking for that next undiscovered spot or secret fly that will lead me to even better fishing and I'm happy to share what I find here on this site. I welcome any of your comments on all of my posts. Feel free to contact me with any questions by e-mail at gmckee1@hotmail.com or call me directly at (239)565-2960. Capt. Gregg McKee