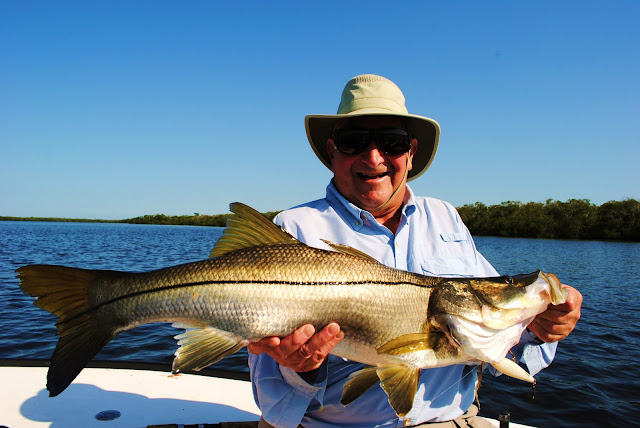 Here's the latest from the FWC:
On June 8 and 9, the Florida Fish and Wildlife Conservation Commission (FWC) will discuss a potential snook season for part of the remainder of 2011 and the beginning of 2012. The question under discussion will be whether to open snook season on September 1, when the current executive order closure expires.
FWC commissioners are considering four options for both the Atlantic and Gulf coasts, including opening the season on the Atlantic Coast on September 1.

The memorable snook kill in 2010, due to sustained cold water temperatures, has impacted the fishery differently on both coasts. Stock assessments show that Gulf breeding stocks took a stronger hit than Atlantic coastal waters. On the Atlantic side, access to deep water and accompanying warmer temperatures helped survival rates during winter. In the Everglades, results show that snook catch rates have not been this low since before 1991. Based on the information gathered, FWC commissioners are considering four options listed below.

Option C would open re-open snook harvest on September 1, 2011, when the newest executive order (extending the closed season through August 31) expires. Snook would close again under the current regulations on December 1 on the Gulf coast and December 15 on the Atlantic coast. In 2012, this option would keep snook closed from January through August 31, 2012, in order to protect the fish during the winter months and during spawning months.

Option D would keep harvest of snook closed until the commission could review the upcoming snook stock assessment and decide if rulemaking is needed. Specifically, this option would keep harvest of snook closed through the remainder of 2011 and until August 31, 2012. Snook harvest would reopen on both coasts on September 1, 2012. This option would protect adult fish for the remainder of this year as well as protect fish during the winter months and spawning months

Commissioners favor a “bicoastal” approach which uses Option A for the Atlantic coast and Option D for the Gulf coast. This would open the snook fishery to anglers on the Atlantic on September 1. For Gulf coast anglers this would set back an opening until August 31, 2012. If harvest remains closed, the commission may consider refunds for snook permits.