Snook Season 2011 Update: No Snook For You, Pine Island! 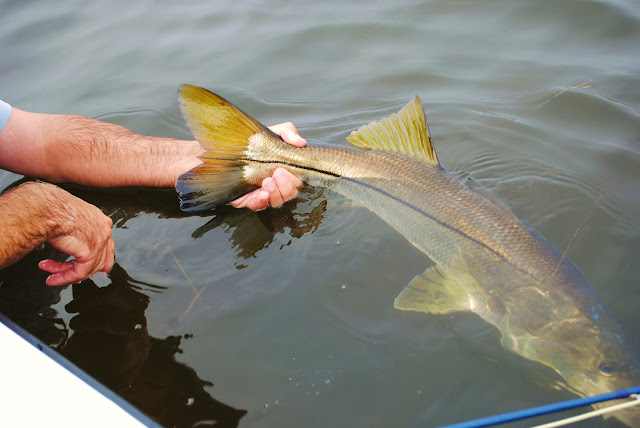 You can still catch them but you gotta release them, at least here on the Gulf Coast of Florida.  The FWC has spoken and snook season will remain closed until August, 2012.

Media contact: Aaron Podey, 850-487-0554
The Florida Fish and Wildlife Conservation Commission (FWC) decided on Thursday to reopen the recreational harvest season for snook in Florida's Atlantic waters on Sept. 1 and maintain a catch-and-release snook fishery in Florida's Gulf waters. Only catch-and-release fishing for snook has been allowed statewide since Dec. 15, 2010 under FWC executive orders to protect snook populations affected by prolonged cold weather in Florida during the winter of 2009-2010.

Commissioners received a staff report regarding the latest information on the status of the snook population, which suggests that snook on Florida's Atlantic coast were less severely impacted by cold weather than Gulf coast snook. Based on this information and public comment it has received, the Commission agreed to reopen the snook harvest season this fall in Atlantic waters.

Snook has been strictly regulated in Florida for more than 50 years. Current regulations include summer and winter closed harvest seasons, a one-fish bag limit during open seasons, restrictive slot-size limits and a prohibition on the sale of snook. The FWC believes these measures helped ensure that snook abundance was healthy enough before the freeze to enable the fishery to rebound and continue to grow in spite of the cold-weather impacts.

Consequently, the Commission determined that the Atlantic stock of snook in Florida's Atlantic coastal and inland waters, including Lake Okeechobee and the Kissimmee River, can return to the regular season opening Sept. 1. The regular daily bag limit of one snook per recreational angler will apply, as will the 28- to 32-inch total length slot limit.

In addition, the current harvest prohibition of snook in all of Florida's Gulf, Everglades National Park and Monroe County state and federal waters will remain in effect until Aug. 31, 2012. This will allow the Gulf snook population additional time to rebound and allow the FWC to complete a full stock assessment that is scheduled to be presented to the Commission in early 2012. Anglers may still catch and release snook during snook harvest closures, and the FWC encourages everyone to handle and release these fish carefully to help ensure their survival upon release.