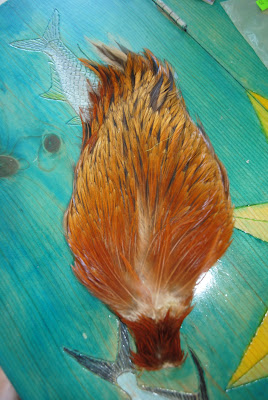 A friend of mine sent me a story that has been making a lot of news in fly fishing circles this past week.  The latest fashion trend of weaving feathers into women's hair has caused a run rooster hackles, especially those from birds provided by Whiting Farms specifically raised for fly tying.  Fly shops are profiting heavily from this and selling $30 hackles for more than ten times that amount to hairdressers.  Good for them, especially in this economy.  It doesn't bother me at all since I only use rabbit fur in 90% of my tarpon flies.  Fly tyers are complaining right now but this trend will probably dissapear quickly.  It was started in Hollywood, of course, by some idiotic celebrity who probably has no idea that those roosters are killed just for those feathers.  (The hackles are actually attached to a big, leathery hunk of skin in the package.)  Once PETA point that out to them they'll stop doing it and the price of feather will drop quickly.  For now, I found this old saddle hackle at the bottom of my tying desk that has a lot of great feathers left on it.  The bidding starts at $300.
Posted by Capt. Gregg at 7:06 AM