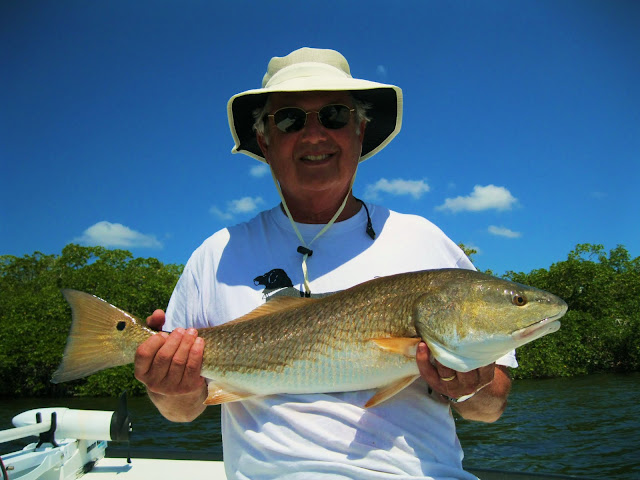 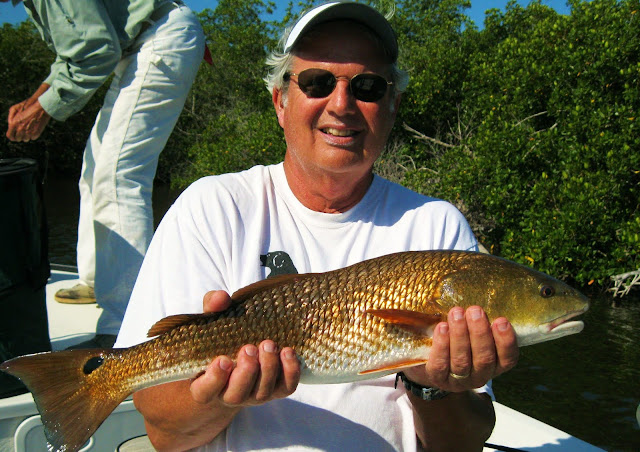 The month of May has been all about chasing tarpon and my abusive, love-hate relationship with these fish that just don't want to cooperate. So today was kind of a relief when Naples anglers Bob Neubert and Ron Reilly decided that their third trip with me this week would be all about chasing snook and reds instead of the tight lipped silver kings.


The snook have been absolutely everywhere and Ron nailed a beautiful 30 incher last Sunday. Today we stayed in the south part of Matlacha Pass and worked the creeks that were flooding on the incoming tide. The narrower the creeks, the more fish we spotted. The two reds that came to the boat were 28 and 24 inches, both caught by Ron on white Super Spook Jrs. The bigger redfish, pictured at the top gave one of the most violent strikes I'd ever witnessed on a topwater, looking more like a Key West barracuda slashing in just under the suface than a bottom feeding crab eater.
These were the first two redfish I've had on the boat in over three weeks. Granted, I haven't be chasing them much since the tarpon arrived but I just haven't been seeing them on the flats either. Today they didn't exactly come out of the woodwork but it was really good to have them back and behaving like the aggressive reds that we know and love here around Pine Island.
Posted by Capt. Gregg at 2:44 PM