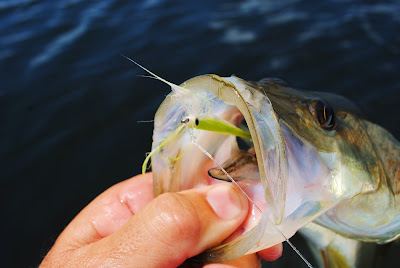 The winds finally died down yesterday but the baby tarpon have been slow to start rolling again in Matlacha Pass.  Charlotte Harbor is still just a bit murky and that makes the bigger cruising fish a little tough to spot, too.  That will all change in the next 48 hours and the tarpon fishing will come roaring back to life for anyone looking to sight cast to these guys with a fly rod.

The snook fishing on the other hand has been awesome all week.  I was amazed by the sheer numbers of big fish we spotted yesterday.  I was on a charter with local angler Steve Pivacheck and the photo above is a close up of the first snook that he landed on a green and white Deceiver fly.  These fish were all over the mangrove shorelines from Burnt Store through Buzzard's Bay.  Every bush we cast two had a handful of 20 inchers underneath it and every 50 yards or so we'd spot a big slot-sized fish sunning itself over a bright sand spot.

Whether or not the state decides to open their season up again this fall, our snook population here in SW Florida is exceptionally healthy.  Right now I'm sitting on the fence with my opinion on this issue.  I'm content to catch and release them but I also think reopening the season will send a positive message to the potential anglers who would like to come here and fish for them later this year.  For once, I'll actually be ok with either decision that the state of Florida makes on an issue that directly affects me.  That's a weird feeling.
Posted by Capt. Gregg at 7:09 AM

Email ThisBlogThis!Share to TwitterShare to FacebookShare to Pinterest
Labels: Matlacha, snook, tarpon
Newer Post Older Post Home
Welcome to the Pine Island Angler. This blog is published from my home base on beautiful Matlacha, Florida where I run my guiding business Wildfly Charters. I started this site to provide regularly updated news about salt water flats fishing throughout Southwest Florida, the Keys, and many other Stateside and Caribbean locations. As a full time guide since 1995 I'm always looking for that next undiscovered spot or secret fly that will lead me to even better fishing and I'm happy to share what I find here on this site. I welcome any of your comments on all of my posts. Feel free to contact me with any questions by e-mail at gmckee1@hotmail.com or call me directly at (239)565-2960. Capt. Gregg McKee