I wrote this last year for the Nautical Mile newspaper but it's worth repeating since tarpon season is here and the anglers in this story just booked me for another trip this summer. 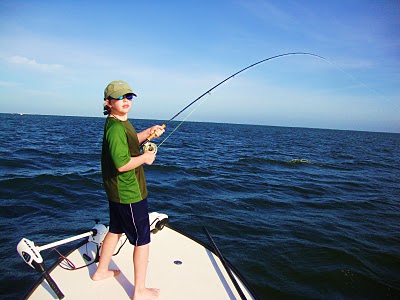 One of my favorite clients of all time is the young man in the picture, Marshall Hespe. He is the type of angler that every guide should have on the bow of their boat. He can cast a fly rod quickly and accurately and spot fish the moment they’re within his range. He rarely misses a shot and is quick to get the fly back on target when he does. He never gets frustrated with himself or the conditions when things go wrong, as they often do in fly fishing, and he doesn’t act any different when things go right.


Marshall is also twelve years old and can cast a fly rod better than many of the adults that I’ve fished with since I started guiding. It’s an amazing thing to watch a Little League centerfielder throw a perfect cast into a wind stiff enough to crush the loops of many veteran anglers. And he keeps getting better.

I first met Marshall and his dad Bill in 2009 when they booked me for a bonefish trip down in Puerto Rico. In addition to all the shots at bones he got, Marshall managed to jump a nice twenty pound tarpon on a flat where these fish rarely appear. He obviously had a knack for the sport and I was thrilled when they booked a three day weekend to fish with me here on Matlacha for the next Spring. He obviously loved hooking tarpon and we have a lot of those around in May. Our small canal tarpon are a perfect size for teaching kids how to eventually fight the bigger fish. I thought we’d target some more juveniles like the one he hooked the previous year and maybe get him a look at some full grown rollers. Turns out I was aiming a little low on that one.

Our first day was a bit slow except for a single tarpon that attacked his fly three times but never managed to find the hook. It wasn’t a big fish, about the same size as the first one he jumped in Puerto Rico, but he was pumped and I promised him we’d snag one more before his trip was done.

Charlotte Harbor was a windy and crowded mess, as it always seems to be on the weekends, when I took Marshall and Bill up there the next day looking for bigger fish. The wind was gusting a solid fifteen knots and there was already a small skiff anchored right on my favorite flat. I handed Marshall my best 10-weight Sage rod with a red and black Tarpon Bunny fly and hoped to just get him a shot or two despite the lousy conditions.

We were five minutes into our first drift when I spotted the dark shape hovering over the light bottom. From a hundred yards away I knew I was looking at a huge laid-up fish. Unlike a lot of kids his age, Marshall isn’t much of a talker. When I asked if he saw the big tarpon all I got was a quick, “Yeah.” He was clearly focused.

I pushed the bow to the right to give Marshall a downwind shot. His dad was sitting behind him on my cooler making sure the loose fly line stayed put in the stiff breeze. When you’re fly fishing on a windy day it’s invaluable to have a second angler on the boat to do this job. We were eighty feet from the tarpon when I had Marshall begin casting. By the time he dropped the fly we’d covered half that distance.

There are days when guiding is the most frustrating job on Earth and you ask yourself why you put up with so much exhaustion and aggravation over a handful of fish that never want to eat. This was not one of those days.

Marshall dropped the fly perfectly on target, stripped twice, and the tarpon lunged forward and ate. When it launched itself out of the water my jaw dropped. She was a massive fish, easily over 125 pounds. The term, “All Hell Broke Loose,” is the only thing that can describe the next twenty minutes.

Most tarpon are lost after the first jump but Marshall cleared his fly line and got the fish on the reel like a veteran. After that it was pure chaos with the tarpon running towards deep water, every other wave breaking over my bow, and Bill and I taking turns driving the boat and keeping Marshall standing in the three foot chop of Charlotte Harbor.

About fifteen minutes into the fight the immortal words of Roy Scheider from the movie “Jaws” started ringing in my ears. “We need a bigger boat!”

My Beavertail B-2 is not specifically designed to run at idle speed in three foot seas and the water dumping into the cockpit was above my ankles and not draining fast enough. The tarpon was still swimming upwind and I had to slow it down somehow. I switched places with Bill at the bow and cranked the drag way down on Marshall’s reel. Bad move on my part.

I jumped back behind the helm, put the boat in neutral, and started bailing with a coffee cup, hoping to help my struggling bilge pump. That’s when the fish made another high speed surge straight upwind. The full drag caused the reel’s loose Dacron backing to dig into itself tighter and tighter with each outgoing turn. When I heard the loud snap I knew exactly what happened. The backing popped and I lost not only an entire $80 fly line but Marshall’s prize tarpon as well.

Most anglers would have melted down into a mass of temper and profanity at that point, myself included. Marshall just looked quietly down at the reel and out to Charlotte Harbor where his fish was swimming away, trailing an expensive souvenir from their brief but violent encounter. He never said a word. When you’re only twelve years old your fish of a lifetime should probably stay out there for a little while longer.

Besides, everybody needs a good “One That Got Away” story, and Marshall now has one that will last a very long time.

Email ThisBlogThis!Share to TwitterShare to FacebookShare to Pinterest
Labels: fly fishing, Pine Island, tarpon
Newer Post Older Post Home
Welcome to the Pine Island Angler. This blog is published from my home base on beautiful Matlacha, Florida where I run my guiding business Wildfly Charters. I started this site to provide regularly updated news about salt water flats fishing throughout Southwest Florida, the Keys, and many other Stateside and Caribbean locations. As a full time guide since 1995 I'm always looking for that next undiscovered spot or secret fly that will lead me to even better fishing and I'm happy to share what I find here on this site. I welcome any of your comments on all of my posts. Feel free to contact me with any questions by e-mail at gmckee1@hotmail.com or call me directly at (239)565-2960. Capt. Gregg McKee