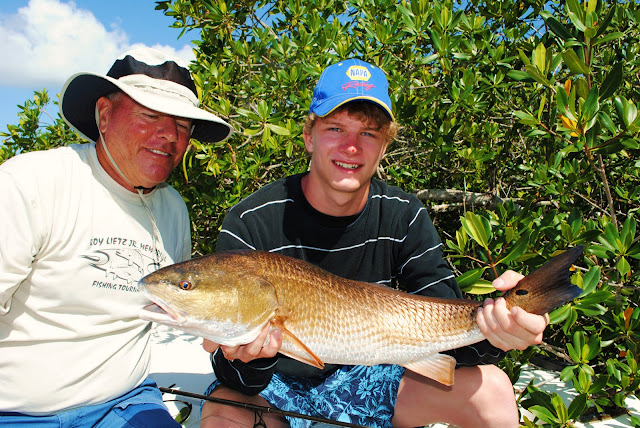 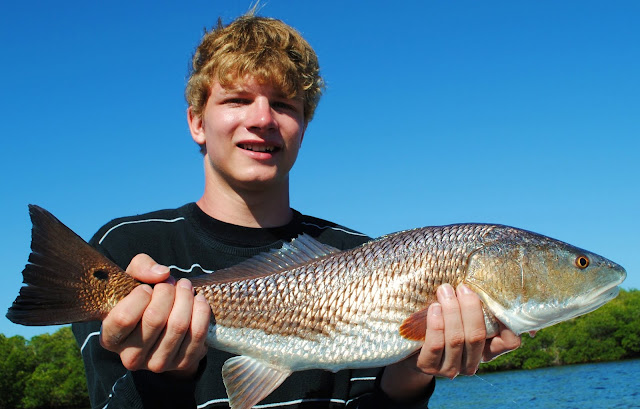 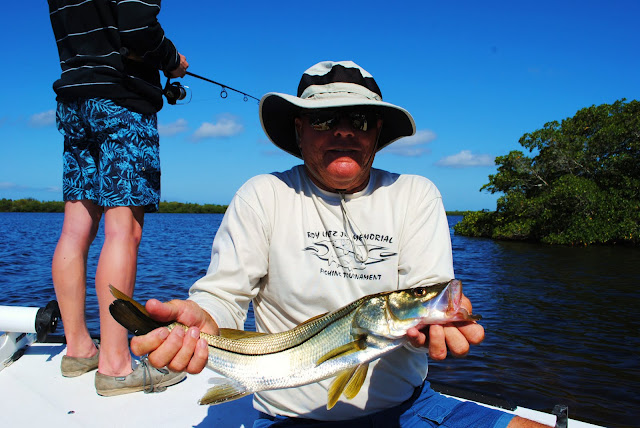 Cape Coral angler Jim Whisner brought his neighbor Eric, who is visiting from Germany, out on my boat this morning to chase down some redfish off Matlacha.  With a strong incoming tide I knew that there would be some nice red working the mangroves in the southern part of the pass and they didn't let us down.  The first fish of the morning was a 17 inch trout that Jim landed on his third cast.  Shortly after that Eric hooked and lost a big snook that nailed a Zara Spook but quickly wore through the 20# leader.  I bumped him up to 30# Flourocarbon and three redfish came into the boat after that.  Two were slot legal and the best was the 28 incher in the first photo.  To top it off, Jim snagged a nice little snook to complete the Slam.  A great morning and we'll have the same conditions all week.
Posted by Capt. Gregg at 5:41 PM

Email ThisBlogThis!Share to TwitterShare to FacebookShare to Pinterest
Labels: Matlacha, redfish, snook, Zara Spook
Newer Post Older Post Home
Welcome to the Pine Island Angler. This blog is published from my home base on beautiful Matlacha, Florida where I run my guiding business Wildfly Charters. I started this site to provide regularly updated news about salt water flats fishing throughout Southwest Florida, the Keys, and many other Stateside and Caribbean locations. As a full time guide since 1995 I'm always looking for that next undiscovered spot or secret fly that will lead me to even better fishing and I'm happy to share what I find here on this site. I welcome any of your comments on all of my posts. Feel free to contact me with any questions by e-mail at gmckee1@hotmail.com or call me directly at (239)565-2960. Capt. Gregg McKee