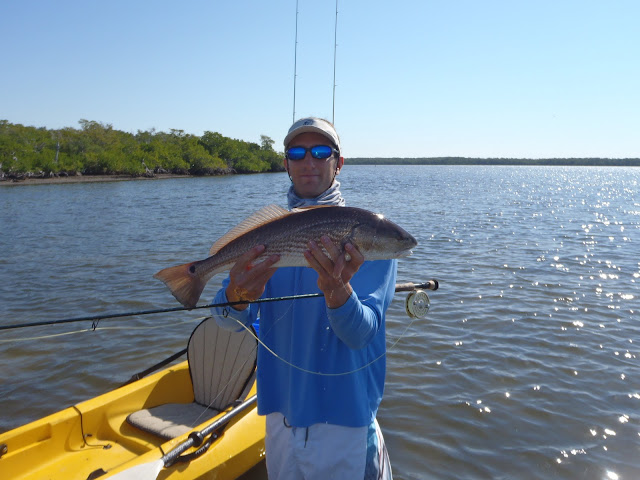 East coast angler Andrew Wideroff sent me this shot of a really nice upper-slot sized redfish that he caught on fly during a very low tide late last week.  He and his buddy Sebastian stopped by Florida Paddlesports the day before and I pointed them in the direction of one of my favorite bays in Matlacha Pass that they could easily paddle to in less than an hour.  None of the fish were tailing down there so that makes this an even more impressive catch.  I was working the same spot with my skiff and a spin fishing client but came home empty handed.
Any time we have negative low tides in the Pass jumping in a kayak is a great idea.  There is a free kayak and canoe launch site at Matlacha Park and some of the best flats in the area are less than a mile away.  Even if you don't want to make the effort to paddle that distance you can toss a small kayak into you boat and use it as a ferry out to the flats.  A lot of folks who own very capable flats and bay boats are stopping by the kayak shop lately to check out this option.  Just because the redfish are playing around in only six inches of water doesn't mean you can't easily get to them.
Posted by Capt. Gregg at 6:15 AM

Email ThisBlogThis!Share to TwitterShare to FacebookShare to Pinterest
Labels: fly fishing, kayaks, Matlacha, redfish
Newer Post Older Post Home
Welcome to the Pine Island Angler. This blog is published from my home base on beautiful Matlacha, Florida where I run my guiding business Wildfly Charters. I started this site to provide regularly updated news about salt water flats fishing throughout Southwest Florida, the Keys, and many other Stateside and Caribbean locations. As a full time guide since 1995 I'm always looking for that next undiscovered spot or secret fly that will lead me to even better fishing and I'm happy to share what I find here on this site. I welcome any of your comments on all of my posts. Feel free to contact me with any questions by e-mail at gmckee1@hotmail.com or call me directly at (239)565-2960. Capt. Gregg McKee