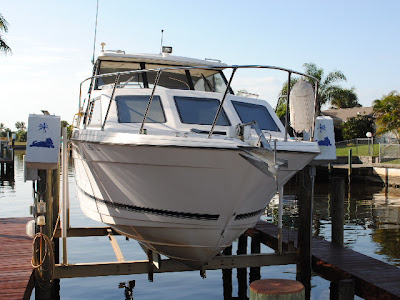 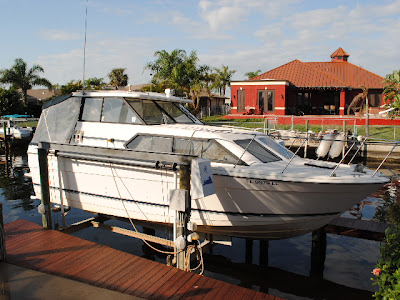 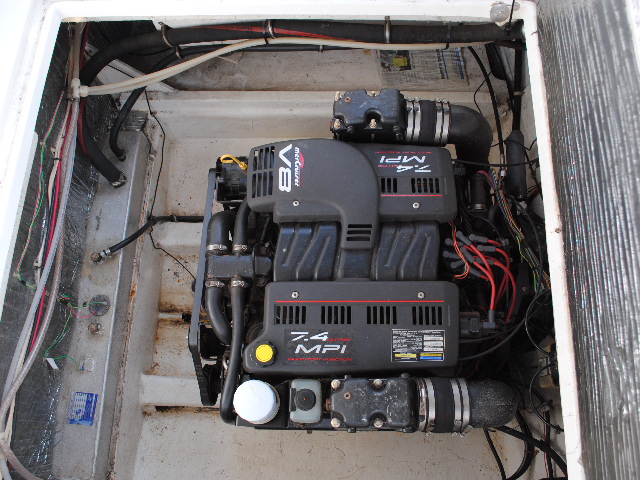 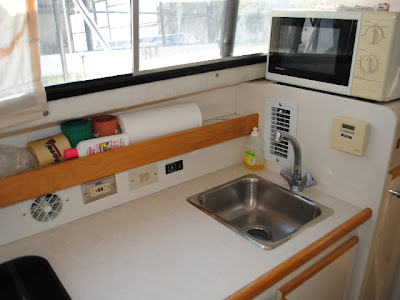 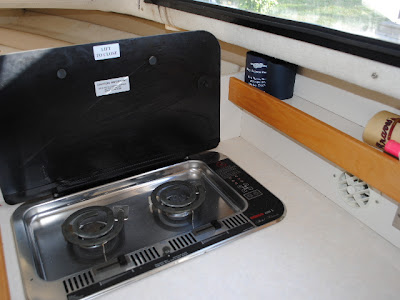 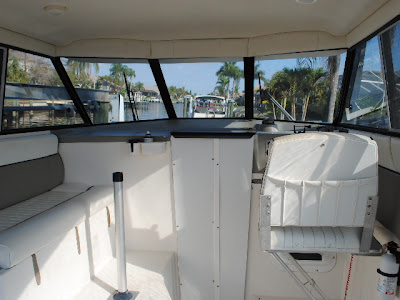 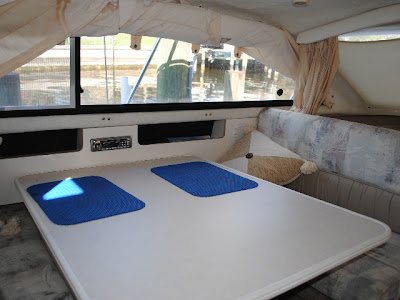 This is an exceptionally clean hardtop cruiser with very low hours. It has been lift stored by the original owners and has only 412 hours on its Mercruiser 7.4 gas engine. The cabin is air conditioned and will sleep up to six people. It also has a full galley featuring an electric stove, microwave, and sink. The deck has a complete canvas enclosure with is in great condition with no rips or other damage. This is one of the nicest hardtop Ciera Express models on the market priced in the mid-$20k's.  The see the complete listing for this boat along with several more photos click here.
Posted by Capt. Gregg at 11:51 AM

I've always told my anglers that the best way to get started with fly fishing is to take a class from a certified instructor and this is a perfect opportunity right here on Pine Island.  Scott is great teacher and his class is very affordable compared to the ones run down in the Florida Keys.  If you want to get up to speed with the fly rod as quickly as possible, do yourself a favor and check out his school.
Posted by Capt. Gregg at 4:23 PM 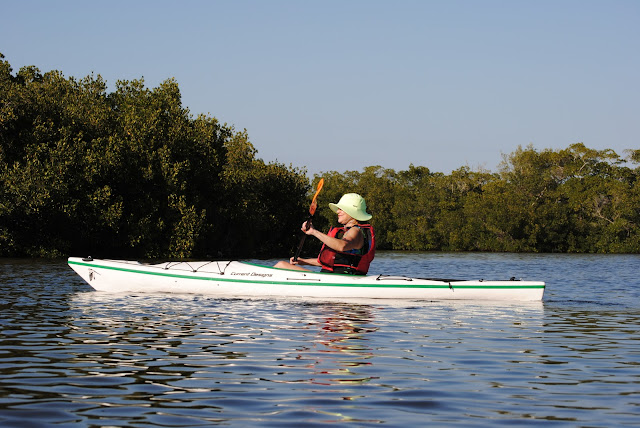 Here's a great article from author Greg Breining, whom I've had the pleasure of fishing with several times, about the fantasic paddling trail right here in our backyard.  In addition to the unbelievable flats fishing, there aren't many places in Florida that are better for kayking than Matlacha and Pine Island.
Posted by Capt. Gregg at 11:07 AM

Email ThisBlogThis!Share to TwitterShare to FacebookShare to Pinterest
Labels: kayaks 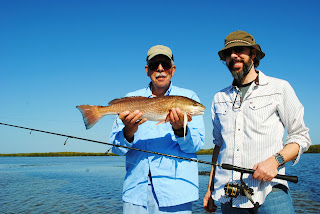 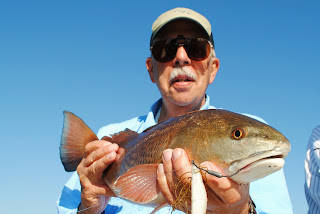 After several trip in a row with Canadian anglers, this time it was the Ohio contingent's turn to nail some Matlacha redfish.  Bob Prescott took home this perfect 23 incher after landing it near Tropical Point in the south part of the pass.  Once again the weedless Zoom jerk bait was the go-to lure for us when we found a school of reds in less than a foot of water.  No matter what you're throwing at these fish, a light flourocarbon leader is essential.  I use 3 feet of 20# Seaguar tied with a triple surgeon's knot to my 15# or 20# Power Pro braid.  That's more than enough muscle for any redfish you'll encounter anywhere around Pine Island.
Posted by Capt. Gregg at 6:31 PM 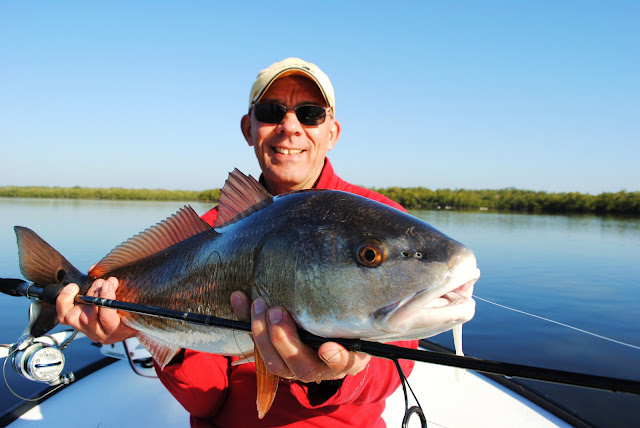 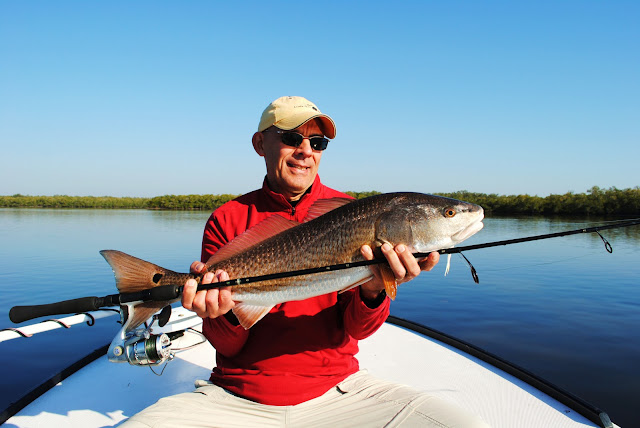 The amount of fish we're seeing in the Pass these days is absolutely insane.  We literally did not go sixty seconds without seeing a big redfish, snook or trout this morning.  All the ingredients were perfectly mixed together and my anglers, Al and John from Ontario, landed four beautiful reds.  The one pictured above was the first fish of the morning that Al caught near the power lines on a white Zoom soft plastic.  This red was a strong pulling 28 incher and was released after the photos.  The guys went on to land three more fish and the smallest was still a legal 25 incher.  Incredible morning and conditions for the rest of the week should only get better.
Posted by Capt. Gregg at 7:09 PM

My buddy Jory Pearson from Florida Paddlesports posted this review last winter of one of his best performing boats:


With kayak fishing becoming so popular these days, we are surrounded by a huge selection of sit-on-top kayaks on the market. Of all styles of kayaks, they still seem to be preferred among fisherman. There are two huge problems with this; 1: sit-on-top kayaks are usually very heavy and, 2: most of them just don’t paddle well. Most of the industry has given up performance for greater stability, at the demand of the customer. Those of us who are avid fishermen, but are actually kayakers as well, tend to be rather put-off by this trend in poor paddling fishing kayaks. In comes Hurricane...

Let’s cut straight to the chase. Your average 14ft sit-on-top kayak is over 70lbs, with some as high as 80lbs! Forget about what that weight does to performance; try getting that boat on top of your car after a day of fishing! NO THANKS! The Hurricane Phoenix 140 is 14ft and only weighs 52lbs. Yep, you heard it right. It’s 20lbs lighter than a traditional Poly (plastic) SOT kayak. That’ll save your back a bit. It achieves this weight by using a thermoformed Trylon material. I make it no surprise that I am a huge fan of Thermoformed kayaks. They offer UV protected, smooth repairable surface, and great weight savings, at usually the same price as Poly, or just a little more. It’s the perfect “Florida” material.

Now lets talk about performance. The Phoenix has a great hull design and uses a fantastic material that offers a very smooth run over the water. Combine that with a very light boat and you have a rocket of a SOT kayak! Coming from the world of touring kayaks, I tend to prefer sit-inside kayaks for general paddling and only use SOT’s for fishing. This is truly a kayak that I am very comfortable using for all of my kayak needs. Even as a fisherman, sometimes the fish just aren’t bitting, and you need to cover some distance to get to the fish. No problem in the Phoenix. It might actually turn you into a “kayaker."

While its a very stable kayak, you wont be standing up in it. You will feel very comfortable in the seat (which is included in the sale price). They designed the molding of the seat area to nicely hug you and provide a high lumbar support to the included seat. The molded seat turns an otherwise mediocre SOT seat into quite comfortable. Upgrade the seat and you may never want to get out of your kayak again. It’s comfy. The ride is very dry. The hull cuts through chop like a sea kayak. The Phoenix 140 also has a really clever scupper hole system. From the deck of the boat, it looks like a traditional SOT, there are two holes in the footwell and two holes in the tank well. Rather than dropping the water straight through the hull, there are tubes running from each of the scuppers on the deck to a single drain hole on the bottom of the hull. What this does wonderfully, is prevents the water from coming up through the scupper holes and getting the paddler wet. Most SOT’s rely on scupper plugs to prevent water from coming up into the cockpit. Brilliant design Hurricane!

If you are in the market for a Sit-on-top kayak, do yourself a favor and give this boat a try. At $1049, its the same cost as your average Poly SOT, with MUCH better performance and a lot sexier package. Oh yea, and your Grandmother can carry it!

Email ThisBlogThis!Share to TwitterShare to FacebookShare to Pinterest
Labels: kayaks 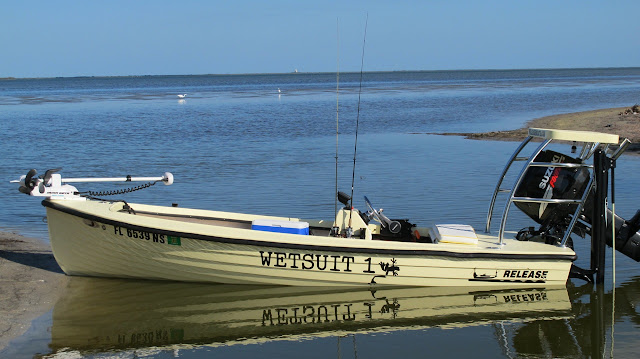 My buddy Paul Murray fishes over on the east coast from this fully tricked out Release Classic 15.  These are great looking and performing little skiffs that use a lap strake hull design that is rarely seen these days.  This is a perfect boat for one or two anglers who want to go places that only a canoe or kayak can normally reach and still have all the extra tools like an electric motor and a Power Pole.  Rigged with a 40 or 50hp four-stroke they'll absolutely sip gas.  Very cool boat.
Posted by Capt. Gregg at 5:59 AM

First Slam Of The Year In Key West 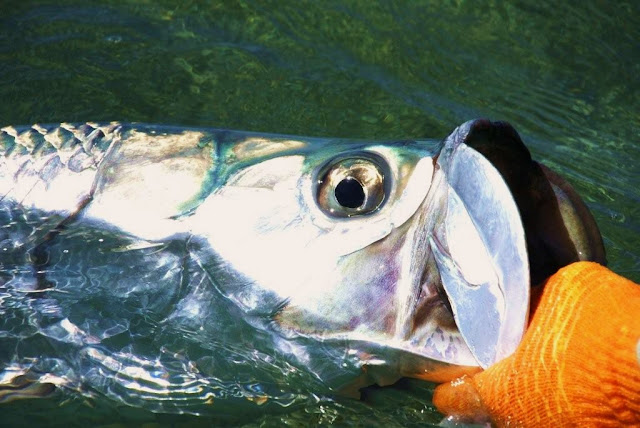 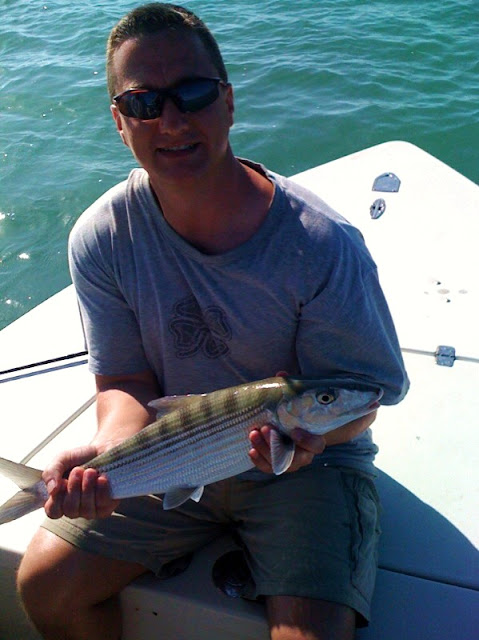 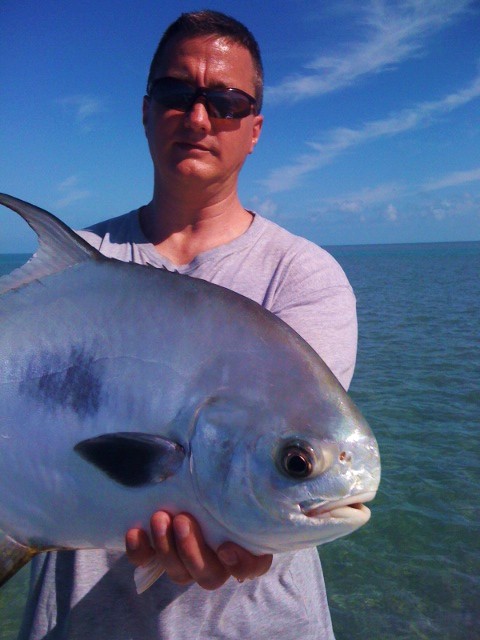 Capt. Mike Bartlett scored what is probably the first Slam of the year for any guide in Key West last week.  His anglers were Steve Rector and Jim Lyddane who landed a tarpon, bonefish and permit all on Friday morning.  Early February is an early month for tarpon in the Keys so this is a rare achievement for this time of year.  Even more impressive is the fact that Mike also caught the first recorded Slam in the Keys last year on almost the exact same week.  You can't go wrong fishing with this guy if you're heading down to the Southernmost City so give him a call at (305)797-2452.  Mike is also from Pittsburgh so all you Packers fans are banned this week.
Posted by Capt. Gregg at 7:30 AM 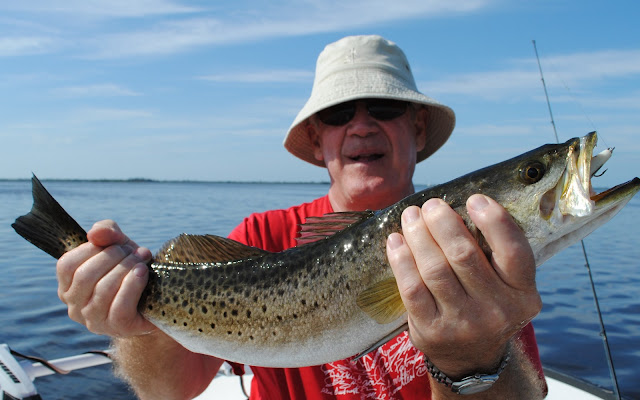 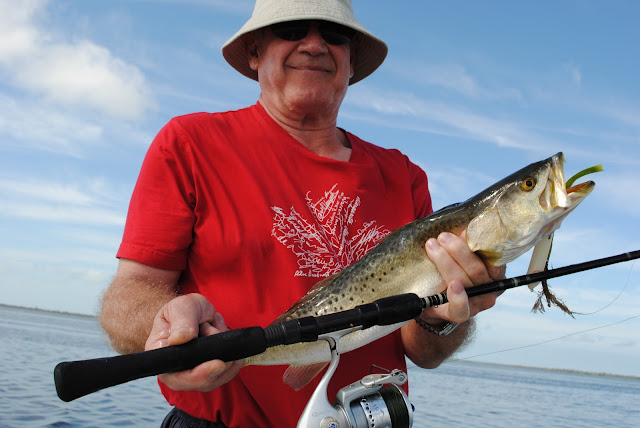 Ontario angler Jerry Fisher came out with me once again this week and scored on some really impressive sea trout.  We were poling the huge flats north of Pineland and tossing topwater lures during the rising tide.  None of the fish Jerry landed were under the minimum size limit and the largest was the 23 incher in the top picture.  I've had more trout over 20 inches on my boat this past month than I did all last year.  This is easily the best trout season I've ever seen in the ten years I've been fishing around these waters.  And the absolutely fantastic weather is an added bonus.
Posted by Capt. Gregg at 6:26 PM 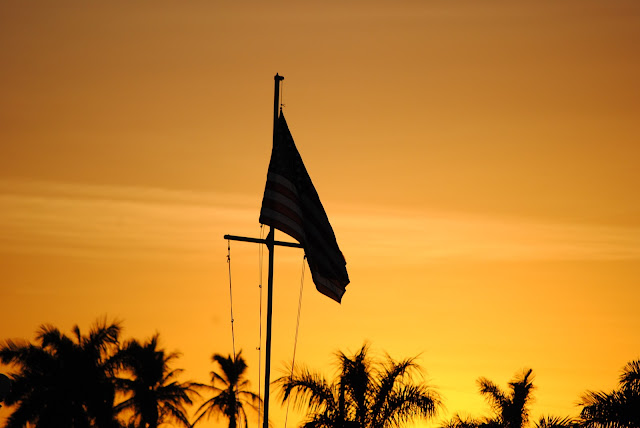 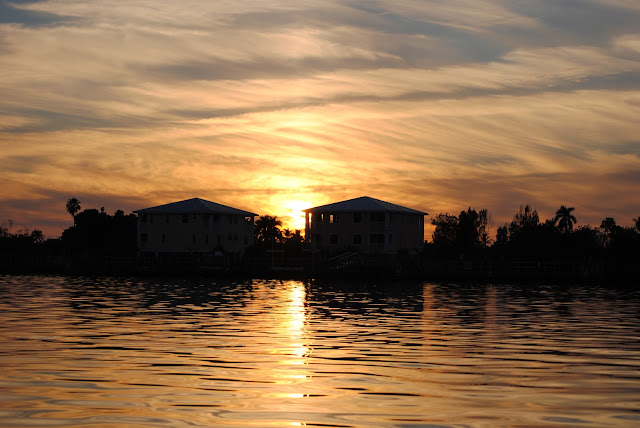 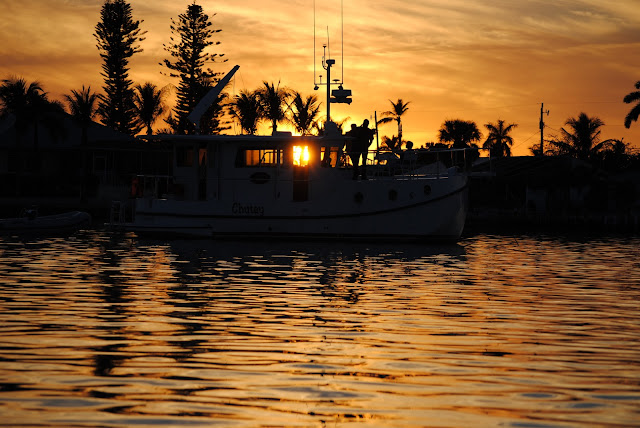 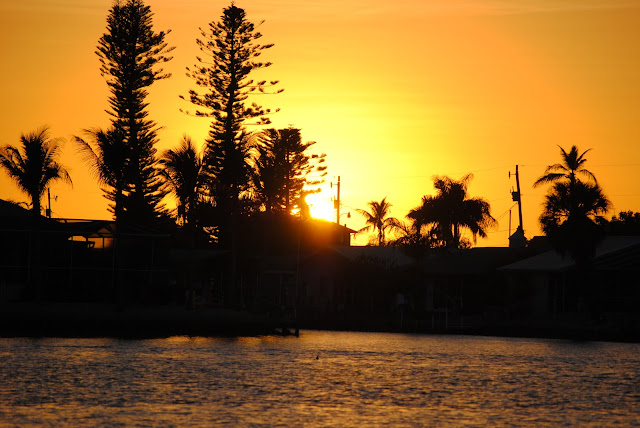 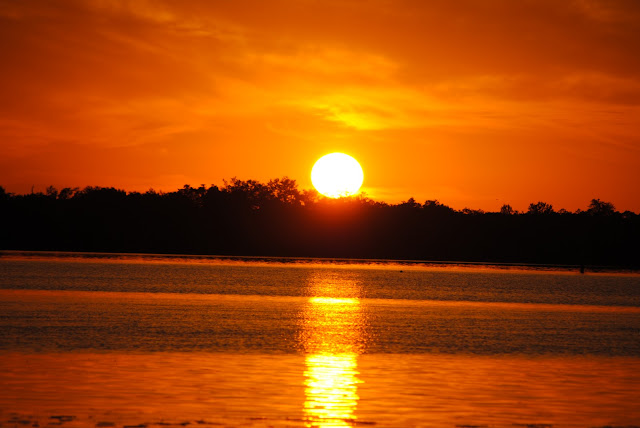 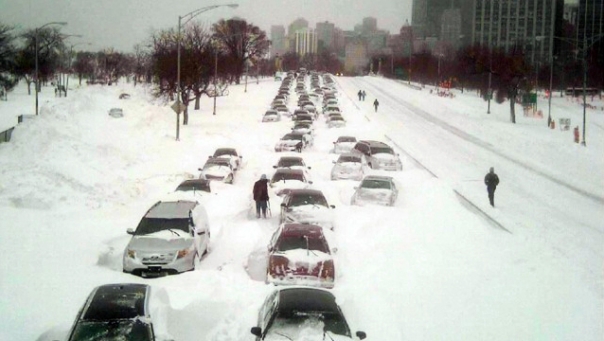 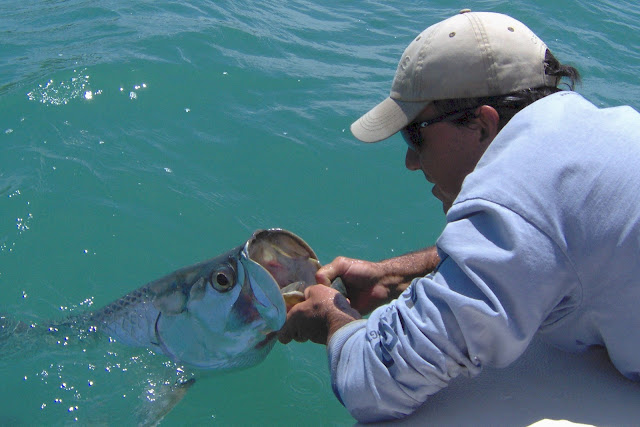 Here's and interesting article detailing the economic impact of tarpon fishing on the local economy.
Posted by Capt. Gregg at 7:45 PM 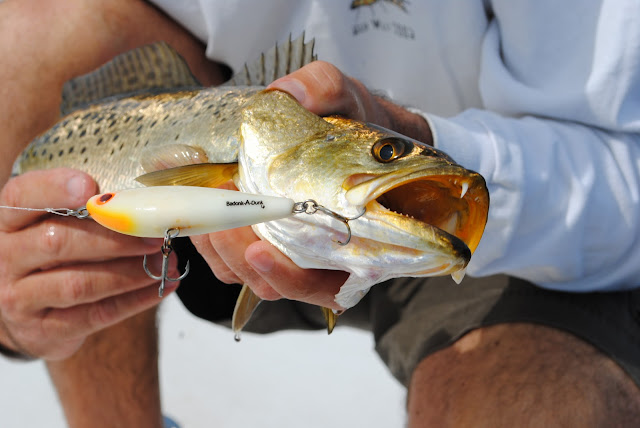 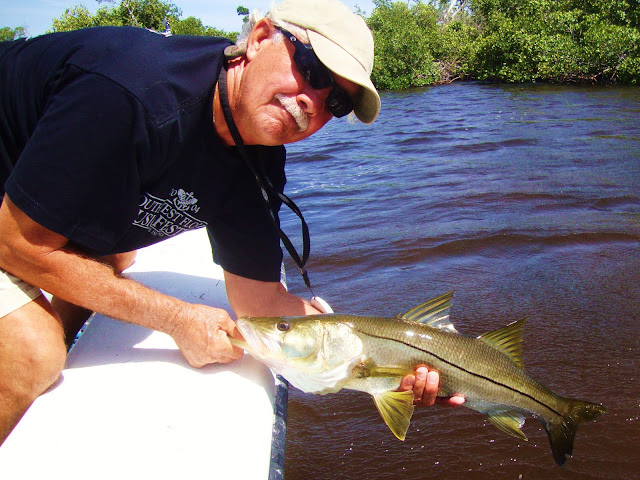 Compared to what we experienced last year, this winter's weather has been an absolute Godsend so far.  On January 9th of 2010 we woke up to 39 degree water temperatures on Matlacha and canals full of dead and dying snook.  It was one of the most depressing things I've ever seen and the FWC canceled the seasons for this species until the fall of this year.  Fortunately, the weather couldn't be more different so far with 2011.  Our air temps are commonly in the mid to upper 70s and the coldest water I've seen was only in the mid 50s.  This is well within the comfort zone for both our fish and my visiting charters. 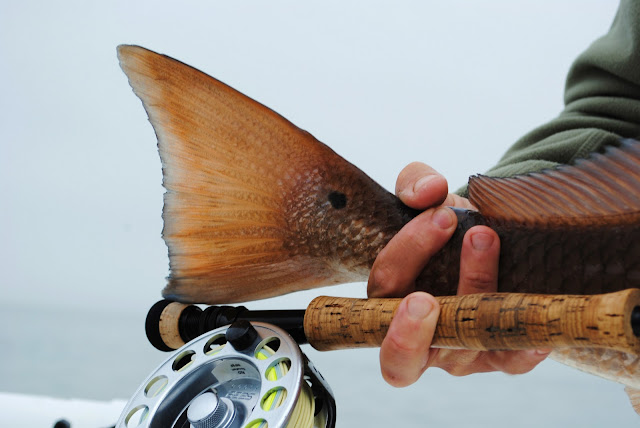 Our redfish population is as healthy as ever and I've caught more oversized reds during the past two months than undersized fish.  The majority of reds that my anglers have boated recently were in that perfect 22 to 26 inch legal range.  Our booming crab population might have something to do with this great crop of redfish.  Ever crab trap I float over in both Matlacha Pass and Pine Island Sound seems to have at close to a dozen blue claws packed inside it and these make up a huge part of the redfish diet.

We still have two months of winter and I'm sure we'll see a handful of cold spells before we're done with it but I'm confident of any early and very warm tarpon season.  Until then we have plenty of great targets and remarkably agreeable weather for any of you blizzard bound folks reading this up north.
Posted by Capt. Gregg at 5:13 AM

Email ThisBlogThis!Share to TwitterShare to FacebookShare to Pinterest
Labels: Matlacha, Pine Island, snook
Newer Posts Older Posts Home
Subscribe to: Posts (Atom)
Welcome to the Pine Island Angler. This blog is published from my home base on beautiful Matlacha, Florida where I run my guiding business Wildfly Charters. I started this site to provide regularly updated news about salt water flats fishing throughout Southwest Florida, the Keys, and many other Stateside and Caribbean locations. As a full time guide since 1995 I'm always looking for that next undiscovered spot or secret fly that will lead me to even better fishing and I'm happy to share what I find here on this site. I welcome any of your comments on all of my posts. Feel free to contact me with any questions by e-mail at gmckee1@hotmail.com or call me directly at (239)565-2960. Capt. Gregg McKee