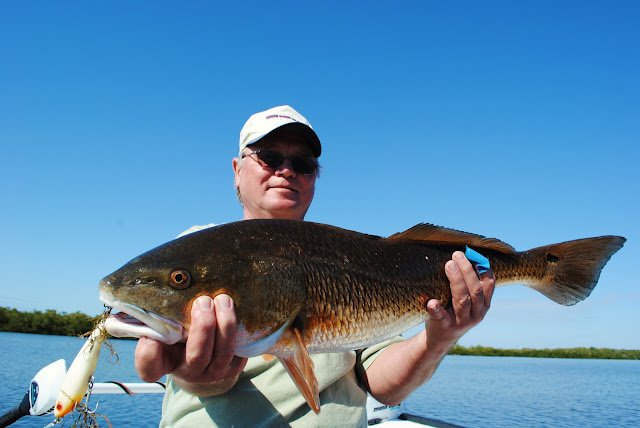 ﻿My buddy Jory Pearson, owner of Florida Paddlesports, brought his father-in-law Walleye Wayne out on my boat this morning.  The conditions were pefect for sight fishing and the water temps were hovering right around the 60 degree mark in the south part of Matlacha Pass.  Unfortunately, nobody told the fish how perfect everything was and they were lockjawed for most of the morning.  Right around 2:00 pm, with the tide really rising and the water hitting the magical mid-60's, the reds started getting active and Wayne landed the beautiful 30 incher in the top photo on a Badonk-a-Donk.  This is a great topwater lure and puts out an irresistable vibration that reds can't resist.  Make sure you have a couple in your tackle box.  Since this redfish was over the slot limit it was released after the pictures.  A short time later Jory got slammed by the 23 inch trout that ate his DOA paddle tail jig.  This fish was the biggest sea trout of the year so far on my boat and was sent right to the grill.  Even though the catching was slow this was a great example of quality beating quantity.
Posted by Capt. Gregg at 2:23 PM

Email ThisBlogThis!Share to TwitterShare to FacebookShare to Pinterest
Labels: Matlacha, Pine Island, redfish, sea trout
Newer Post Older Post Home
Welcome to the Pine Island Angler. This blog is published from my home base on beautiful Matlacha, Florida where I run my guiding business Wildfly Charters. I started this site to provide regularly updated news about salt water flats fishing throughout Southwest Florida, the Keys, and many other Stateside and Caribbean locations. As a full time guide since 1995 I'm always looking for that next undiscovered spot or secret fly that will lead me to even better fishing and I'm happy to share what I find here on this site. I welcome any of your comments on all of my posts. Feel free to contact me with any questions by e-mail at gmckee1@hotmail.com or call me directly at (239)565-2960. Capt. Gregg McKee