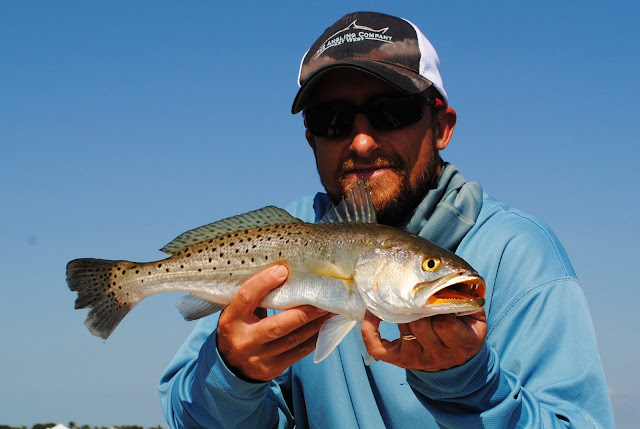 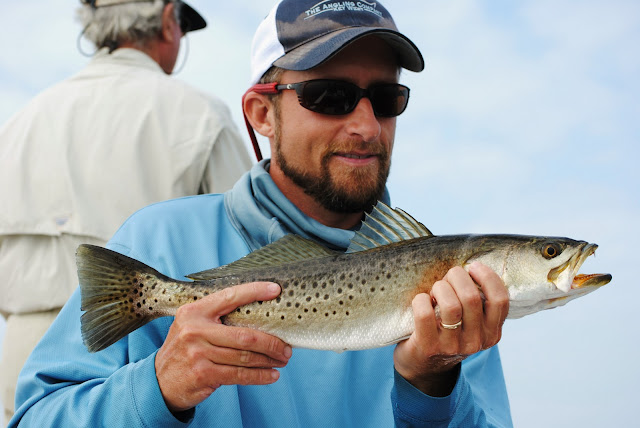 Everyone is Southwest Florida jokes that you'll catch the biggest sea trout of the year on December 31st, the last day that their season is closed, and they always seem to disappear the very next morning.  So far this year that hasn't been the case.  We are absolutely slamming the big trout all over Pine Island, especially over the grass flats in the northern part of the Sound.  The fish in these photos were caught on the flats near Jug Creek and also around Cabbage Key and they were not the largest ones we landed.  After the redfish stopped tailing we switched from flies to topwater lures and drew strike after strike from these big, legal sized trout.  It's really a blast to hook into one of these fish that can actually pull some line from a reel.  It's even nicer to be able to grill a few up, too.
Posted by Capt. Gregg at 4:05 PM

Email ThisBlogThis!Share to TwitterShare to FacebookShare to Pinterest
Labels: Cabbage Key, fly fishing, Matlacha, Pine Island, Sanibel, sea trout, Zara Spook
Newer Post Older Post Home
Welcome to the Pine Island Angler. This blog is published from my home base on beautiful Matlacha, Florida where I run my guiding business Wildfly Charters. I started this site to provide regularly updated news about salt water flats fishing throughout Southwest Florida, the Keys, and many other Stateside and Caribbean locations. As a full time guide since 1995 I'm always looking for that next undiscovered spot or secret fly that will lead me to even better fishing and I'm happy to share what I find here on this site. I welcome any of your comments on all of my posts. Feel free to contact me with any questions by e-mail at gmckee1@hotmail.com or call me directly at (239)565-2960. Capt. Gregg McKee