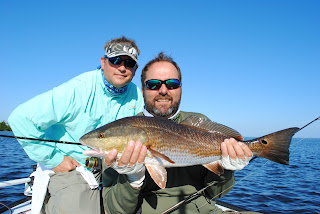 Today we had productive but sometimes frustrating morning of chasing redfish in both Matlacha Pass and Pine Island Sound before the cold front hit us in the afternoon.  To sum things up, there are still a lot of reds around and most of them are fatties like the one pictured above caught by Ft. Myers angler Ed Hermann on a Zara Spook.  We started off by casting to a few tailers right at the bottom of the tide and finally landed this 24 incher a half hour later.  It was the same story as almost every other big redfish I've caught lately:  find the largest school of mullet and start casting.  There will be at least one burried in there.

The frustrating part came later when the fish failed to show at some of their usual haunts like the flats off Cabbage Key and Pineland thanks to the advancing cold front.  I found only a fraction of the reds in these spots compared to a week ago with similar tides.  Oh well, it's always great to be able to blame the weather but if we were only meant to catch one red this morning this was the perfect fish.  We also managed to land a handful of trout and every one of them would have been a keeper if their season was open.  I'm actually looking forward to what some lower temps and hopefully cleaner water will bring us this week.
Posted by Capt. Gregg at 6:37 PM