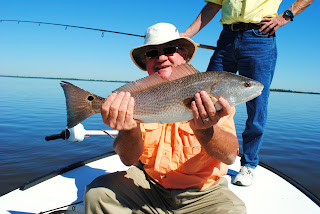 Last week's cold front sent our water temps down into the lower 60's for the entire weekend and combined with some strong north winds made fishing a serious chore just about everwhere.  Sunday gave us some of the lowest tides I'd ever seen in all the years I've fished around Pine Island.  While delivering a boat from Burnt Store Marine to Sanibel I saw dozens of oyster bars that I never new existed.  I also saw some of my favorite redfish flats so far out of the water that they looked more like a lawn that needed mowing.  It's way too early for this stuff to be happening as far as I'm concerned and it looks like we're in for another extra cold winter.

The choke hold finally ended this morning and the day turned out beautiful for my charter.  Pictured above is angler Bill Lee from Toronto who came down with his buddy Mike to hit the flats for the first time.  The guys had never even seen a redfish before and Bill finally landed this nice 22 incher after a few hours of casting topwaters.  We flushed plenty of reds and some really nice trout and they were all reluctant to hit anything.  The water was 63 degrees when we left the ramp but had climbed up to 68 when the red in the photo finally ate.  One positive note to the colder temps is the increasing clarity of the flats to the south of Matlacha.  This made sight casting a lot easier and gave me a great feel for how many fish are really out there right now.  Fishing for the rest of the week should be excellent.
Posted by Capt. Gregg at 3:52 PM