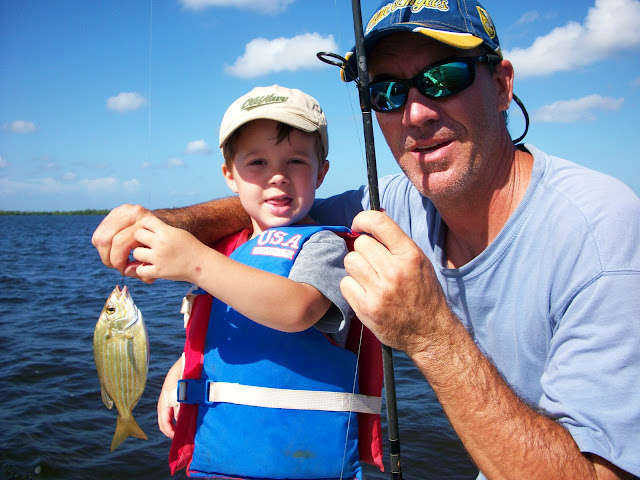 Some of the most memorable anglers I’ve had over the past fifteen years have been kids. I’ve seen veteran twelve-year-olds do some amazing things from jumping a 150 pound tarpon off Bokeelia to almost landing a world record permit on fly in the Keys. But it’s the even younger kids on their first flats trip that I look forward to fishing with the most.

I’ve always allowed my customers to bring one or two of their children along on a charter as long as they’re at least six years old, will wear the mandatory life jackets, and can swim. Since most of my fishing is done in less than three feet of water I’ve always felt very comfortable doing this and I love being able to introduce them to some of the amazing things that swim in our waters.

Children can be tricky and restless on a small boat like my Beavertail but it’s important that they enjoy the experience right off the bat. Here’s a quick rundown of what I try to do when I have a kid onboard for their first fishing trip and really want to hook them on the sport.

The most important thing is a no-brainer: catch them something, quickly. Kids need bent rods and it doesn’t matter what species is doing the bending. Pinfish or snappers are effortless and even the sail cats we normally hate will be a thrill if it’s the first fish they’ve ever landed. Here around Pine Island a nice school of ladyfish is manna from heaven when I have an eight-year-old on the boat. Ladyfish are the perfect species for a kid because they do it all: jump, run, pull hard, and they even poop all over the deck which most kids seem to find hilarious. On top of all that we don’t eat ladyfish so you get to teach them catch and release.

Of course if you really want to give kids a thrill chop up a ladyfish (something boys especially love to watch) and toss a hunk out for sharks. When I was guiding in the Keys and had a kid on board I was going shark fishing, period. They just love everything about it, especially seeing that unmistakable shape circling the boat. The species of shark doesn’t matter. Sluggish nurse sharks are just as much fun as anything when the drag is cranked down and they’re thrashing at the surface. Nurse sharks are also a lot safer to let kids touch when you leader them next to the boat. Here around Pine Island our most common sharks are the much more dangerous bulls and blacktips, so that’s an added thrill but one I never let anyone try to pet.

If the bite slows down and my young passengers start to get restless there are a few other tactics I turn to in order to channel that energy. A full baitwell is like a mini touch-tank at the aquarium. Kids love to play in the bait well and mine has a lid that can’t accidentally slam shut, which is very important. I always keep several dozen live shrimp in there and I also like to toss in a couple of pinfish and declawed blue crabs to let them chase around with the dip net. Last summer my three year old nephew Matt was down from Pennsylvania for the first time and the bait well was the highlight of his fishing trip. He landed his first catch, an awesome six inch pinfish, and then it was right back to messing with the shrimp. It never fails.
Most kids also like to play in the tackle box if they get bored but you obviously don’t want them handling hooks or lures. I keep that gear safely stowed but I do leave out a clear Plano box full of dozens of different soft plastic baits. I let the kids pick out their favorite color if we’re jig fishing and the realistic DOA’s are especially fun to play with. Even after they spend hours getting everything mixed up in there they always seem to enjoy putting the baits back in order for me if I ask them. Who knew tackle could be so much fun and such a great distraction? I’m hoping someone will throw my wife a baby shower down at Bass Pro just for that reason.
Finally, when the kids are clearly ready to quit, we quit. Some can easily handle a full day’s fishing trip but most can’t. Forcing them to sit through just a few more hours on the boat when they’re hot and restless will only make them forget all the fun they had at the beginning of the day. A four hour charter seems to work best and that’s also more than enough sun for most children. The idea is to send them home tired but not exhausted and most importantly, send them home wanting to come back for more.
Posted by Capt. Gregg at 5:49 AM