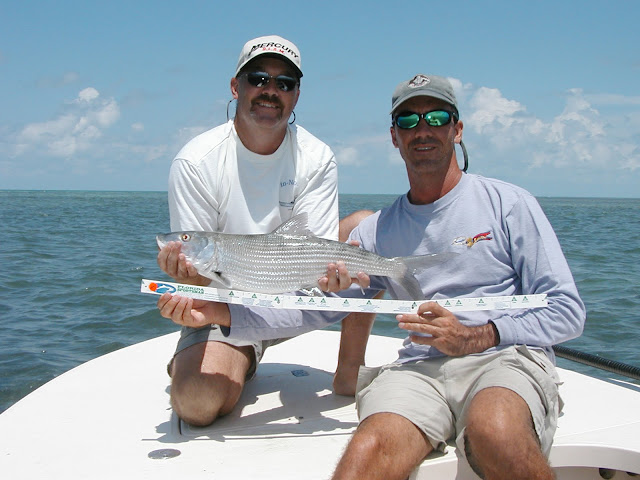 An old friend of mine recently sent me this photo from the last time I guided in the annual Redbone SLAM tournament down in Key West.  This was from 2003, back when my three-day beard still grew in dark instead of pure grey.  The angler was Ned Hammond and his 8 pound bonefish was the second largest caught in the tournament that year.  We missed the trophy by two inches.
The Redbone is a great series of tournaments that benefit cystic fibrosis research.  They originated in the Keys and are now held throughout the US and are covered by ESPN.  I always enjoyed fishing them for both the competitive aspect and also for the chance to rub elbows with some of the most well known names in angling.  The Redbone also boasts several celebrity participants including the "Big Man" Clarence Clemons from the E-Street Band.  Big Man would often jump on stage with the band at the Schooner Warf bar for several sets after the awards banquets.  That was always a real highlight for everyone down there.
They have a great website and you can find a tournament near you by clicking here.
Posted by Capt. Gregg at 8:16 PM

Email ThisBlogThis!Share to TwitterShare to FacebookShare to Pinterest
Labels: Key West
Newer Post Older Post Home
Welcome to the Pine Island Angler. This blog is published from my home base on beautiful Matlacha, Florida where I run my guiding business Wildfly Charters. I started this site to provide regularly updated news about salt water flats fishing throughout Southwest Florida, the Keys, and many other Stateside and Caribbean locations. As a full time guide since 1995 I'm always looking for that next undiscovered spot or secret fly that will lead me to even better fishing and I'm happy to share what I find here on this site. I welcome any of your comments on all of my posts. Feel free to contact me with any questions by e-mail at gmckee1@hotmail.com or call me directly at (239)565-2960. Capt. Gregg McKee