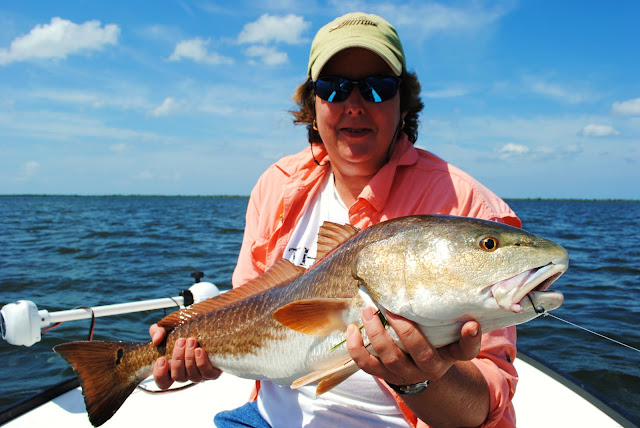 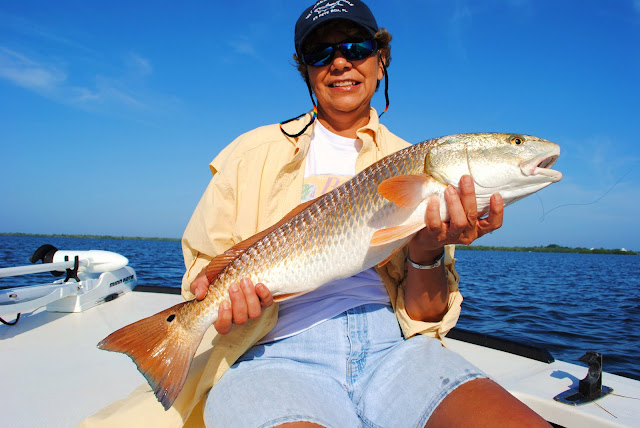 Yesterday was the first day of fall and right on schedule the redfish poured into Pine Island Sound.  It was actually kind of an amazing sight to behold.  I'd gone over a week without hooking a decent red, and several days without even seeing any, and suddenly the floodgates opened as soon as summer officially ended.  I've easily come across hundreds of redfish in the last 48 hours.
Missouri anglers Joanne Butrin and Carol Young were on the bow of my boat for the last two days and we did nothing but sightcast to cruising redfish in Pine Island sound.  The first day hammered us with near 20 knot winds but revealed some huge schools of reds in the shallows near Useppa and Cabbage Key.  Some of these schools easily held over 100 fish but amazingly, they wouldn't eat.  I'd never experienced anything like the constant refusals we kept getting on both arificials and live shrimp.  Normally schooling redfish are notoriously stupid but these SOB's simply wouldn't be fooled.  Maybe they were just getting used to the cooler temps but I had no real explanation.  Carol eventually tossed a shrimp on the back of a mudding stingray and hooked the beautiful 29-inch red pictured in the top photo.  This fish was quickly released.
The winds were a lot more tolerable this morning and Joanne had all the great shots.  She hooked and landed three different reds on live shrimp and two were so close to the 28 inch upper slot limit that we could have won a tournament with them.  Fall is definitely here and the return of these big reds is reason to celebrate.  If you want a shot at the year's best sight fishing start planning a trip to Southwest Florida.
Posted by Capt. Gregg at 2:14 PM

Email ThisBlogThis!Share to TwitterShare to FacebookShare to Pinterest
Labels: redfish, Useppa
Newer Post Older Post Home
Welcome to the Pine Island Angler. This blog is published from my home base on beautiful Matlacha, Florida where I run my guiding business Wildfly Charters. I started this site to provide regularly updated news about salt water flats fishing throughout Southwest Florida, the Keys, and many other Stateside and Caribbean locations. As a full time guide since 1995 I'm always looking for that next undiscovered spot or secret fly that will lead me to even better fishing and I'm happy to share what I find here on this site. I welcome any of your comments on all of my posts. Feel free to contact me with any questions by e-mail at gmckee1@hotmail.com or call me directly at (239)565-2960. Capt. Gregg McKee