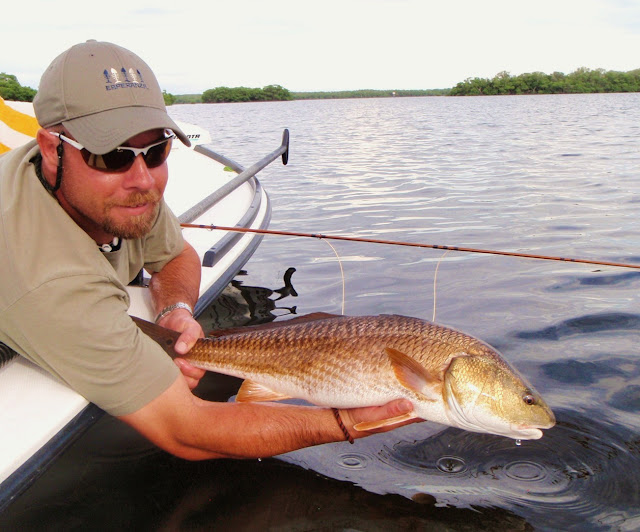 Everyone knows that redfish aren’t picky eaters. They’ll hit everything from cut ladyfish to dry flies, but they really love crabs. Last month I was poling the southern Matlacha Pass just before sunset with one of my regular anglers, keeping Bert’s Bar within sight so Eric and I could race in once the no-seeums found us, when I noticed the water was filled with crabs of all sizes. There were huge blue claws waving defensively at us from the bottom and smaller pass crabs clinging to the struts of my trim tabs. They were everywhere, even paddling along the surface. That’s when the first school of reds started pushing towards us, heads down and tails up, grabbing every crustacean in their path. Eric dropped his hand-tied pattern in the middle of the school and it was clobbered instantly. Ten minutes later we had the perfect 29 inch redfish, his first on fly, next to the boat. When we held it up for some photos we could feel the hard pieces of crushed crab shell packed tight in its belly.
A few days later we watched another feeding frenzy, this time involving dozens of tarpon as well as countless ladyfish and catfish feeding on an acre of bait. In addition to crabs they were busting shrimp, pinfish, the occasional tiny flounder and even puffer fish. It was an amazing sight to see so much food thrown together and the tarpon couldn’t have looked happier eating such a collection of hard shelled, clawed, and pointy things.
That’s when I was reminded of an article that seems to spread across the internet every few years. It was a scientific study promoted heavily by PETA (People for the Ethical Treatment of Animals) declaring that fish feel a significant amount of actual pain when hooked. Some of my tree-hugging friends (yes, I have a few) forwarded that article to me and I read it carefully, thought about it, and declared it total BS. It’s obvious what “research” like that is trying to accomplish, which is to make us think that fishing is cruel. Of course I don’t agree with that notion and I really hate seeing it pushed on non-anglers and especially on kids. Check PETA’s website and you’ll see them unapologetically do this with a very heavy hand. I have absolutely no background in marine biology or neurology of any kind, but I know slanted reporting when I see it, so here’s my totally unscientific take on this subject. 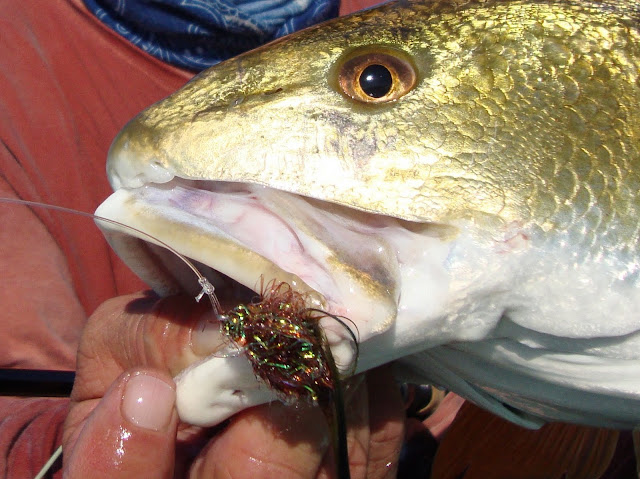 First, let’s go back to the redfish in that photo for a moment. After Eric struck it with the fly it did what many reds usually do, shook its head briefly and slowly swam away from us. The 1/0 hook point didn’t faze it in the least. Only when the line came tight did the fish go berserk. It felt resistance, something totally unnatural, and that triggered its flight response. A metal hook jabbing that fish in the mouth was meaningless, it simply didn’t feel it as pain like you or I would. Don’t believe me? Then here’s a quick test for you to try yourself, again totally unscientific. Go find a live, palm sized blue crab, pop it in your mouth and chew hard. Then, on your way to the emergency room, ponder the fact that redfish do the same thing all day, every day. They eat live, hard shell crabs like we eat Ben and Jerry’s. Except the Ben and Jerry’s doesn’t fight back.
At this point it might sound like I have a problem with the animal rights crowd, and I do, even though I’m with them on a lot of issues. I’m not a vegetarian, far from it, but I detest animal cruelty, especially against dogs. Michael Vick should still be taking prison showers, not making millions in the NFL. I also think commercial whaling is an atrocious and inexcusable act. I love that TV show “Whale Wars” and I keep rooting for those incompetent hippies to finally sink those Japanese harpoon ships one day. Most of animal rights people have their hearts in the right place but it’s the PETA folks that take things too far.
When they pull stunts like breaking into a New York fashion show screaming “Fur is Murder!” and tossing fake blood on the runway models, they’ve lost me forever. You people who do this might think you’re heroic but terrorizing a bunch of anorexic young girls doesn’t make you a vegetarian Rambo, it just makes you a gutless clown. Try this instead if you want my respect. Drive out to the Ragged Ass Saloon here on Pine Island next weekend (you can’t miss the place, just look for all the Harleys,) then go inside and try throwing fake blood on some of the women in there. They won’t be wearing full length chinchilla but hey, if “Fur is Murder” so is leather. Wearing one dead animal is no less cruel than wearing another, right? I’ll sit outside and sell tickets to that one. After the long, hard season we’ve had I could use some entertainment. 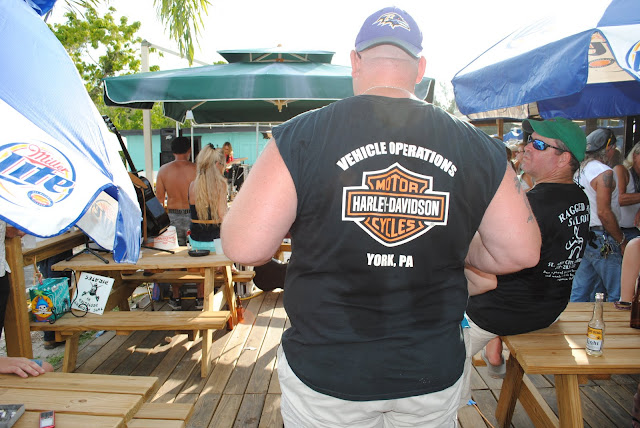 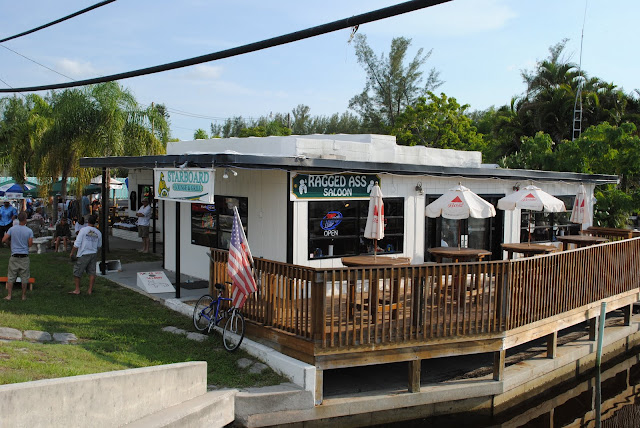 I try not to get too philosophical on the subject of fish. They’re magnificent animals and I make my living thanks to them, but I don’t assign fish the same “rights” as a human or consider their “feelings” like those of my pets. I release most of the fish I catch and quickly dispatch the few I choose to eat. And I have no problem putting a hook into the bottom lip of a big red simply because I want a closer look and a photo. They’ll shake it off and just go hunting something else to eat with big claws or spines. They’re fish after all, and they’re a lot tougher than us.
Posted by Unknown at 2:21 PM

Email ThisBlogThis!Share to TwitterShare to FacebookShare to Pinterest
Labels: Pine Island, redfish
Newer Post Older Post Home
Welcome to the Pine Island Angler. This blog is published from my home base on beautiful Matlacha, Florida where I run my guiding business Wildfly Charters. I started this site to provide regularly updated news about salt water flats fishing throughout Southwest Florida, the Keys, and many other Stateside and Caribbean locations. As a full time guide since 1995 I'm always looking for that next undiscovered spot or secret fly that will lead me to even better fishing and I'm happy to share what I find here on this site. I welcome any of your comments on all of my posts. Feel free to contact me with any questions by e-mail at gmckee1@hotmail.com or call me directly at (239)565-2960. Capt. Gregg McKee