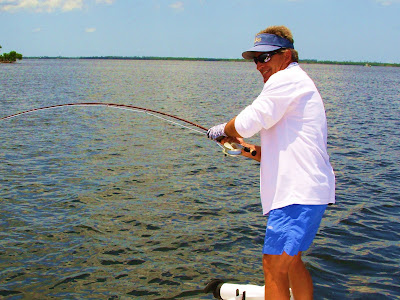 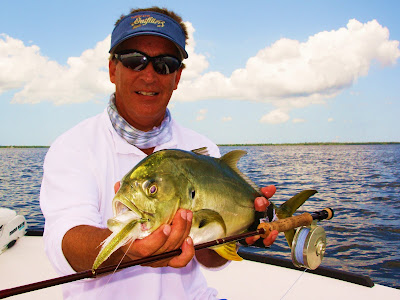 Yesterday was one of those mornings that guides like to describe as great fishing and just a little bit of catching. Local fly angler Steve Krystyniak came out with me again and our first target was some of the big redfish that have moved into Matlacha Pass. With the low tides happening just before sunrise all week we've had great tailing action over the last several days. Steve and I were on dozens of reds for the first two hours of our morning, spooking them left and right in the dead calm water despite the fact that Steve was only casting unweighted flies. I'd never seen so many feeding reds act more nervous than all the bonefish I've ever chased over the years. It was awesomely aggravating but a lot of fun to see that many beautiful fish in one area.

We moved on to the tarpon in Charlotte Harbor after that and the big females are still pouring into the deeper water up there. Things were a little slower and Steve still managed three or four perfect shots at laid up fish but we got no interest from these tarpon. We were clearly using the wrong pattern. That's the beauty of fly fishing. You can always blame the fly.

Our final stop was a Pine Island basin holding a lot of juvenile tarpon. Steve switched to a dark purple Toad fly, one of my favorites, and got a quick eat right away but no hook-up. The fish simply missed the hook. We cast at rolling fish for the next two hours and finally managed to connect with this nice jack that was part of a school busting bait up and down the shoreline. This crevalle was basically five pounds of icing on the cake for us yesterday.

Even though we only landed this one fish, no more than five minutes went by when Steve wasn't casting his fly rod at something. It was one of those rare mornings when the time just flew by despite almost never having a bent rod. What a great day.

(Steve, I swear I'll get you a tarpon next time. Really. You gotta believe me!)
Posted by Capt. Gregg at 9:24 AM

Email ThisBlogThis!Share to TwitterShare to FacebookShare to Pinterest
Labels: fly fishing, Matlacha, redfish, tarpon
Newer Post Older Post Home
Welcome to the Pine Island Angler. This blog is published from my home base on beautiful Matlacha, Florida where I run my guiding business Wildfly Charters. I started this site to provide regularly updated news about salt water flats fishing throughout Southwest Florida, the Keys, and many other Stateside and Caribbean locations. As a full time guide since 1995 I'm always looking for that next undiscovered spot or secret fly that will lead me to even better fishing and I'm happy to share what I find here on this site. I welcome any of your comments on all of my posts. Feel free to contact me with any questions by e-mail at gmckee1@hotmail.com or call me directly at (239)565-2960. Capt. Gregg McKee