It Is Definitely Tarpon Season On Pine Island 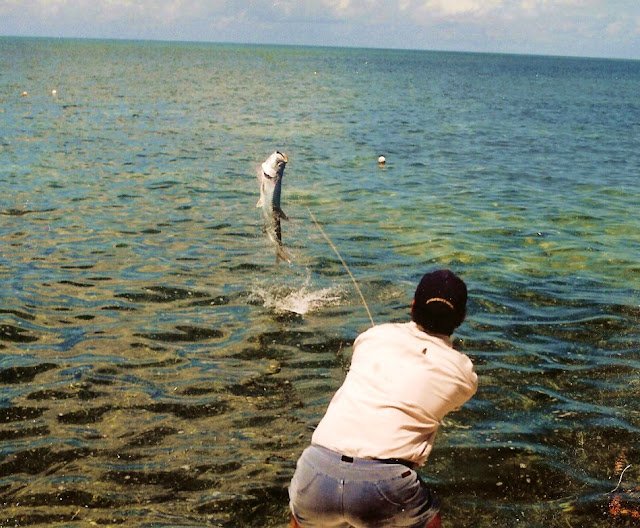 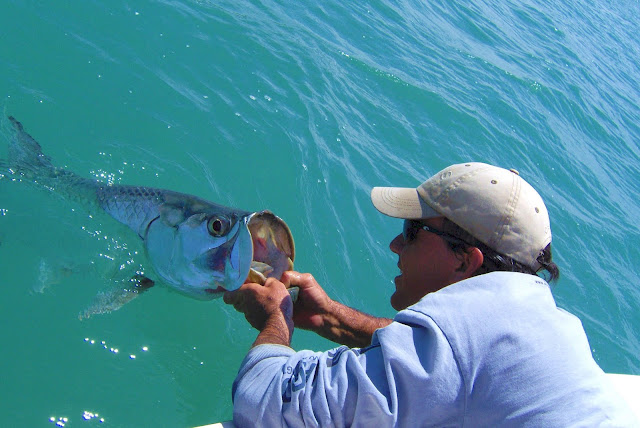 Right now there are tarpon pouring into Charlotte Harbor, Boca Grande Pass, and Pine Island Sound. I was out yesterday with my buddy Wild Bill and we both had half a dozen great shots at some seriously big tarpon. Unfortunately I suck and didn't land anything so the pictures above are from different days.

I was actually amazed that the tarpon we saw were willing to eat. We had a lot going against us. We were out late in the afternoon and the wind was gusting between 15 to 20 knots. Every tarpon we saw was in 6 feet of water and with the tide running out they were all pointing directly away from our skiff. That meant that we had to throw the flies over their backs, something guaranteed to spook a tarpon in most cases. At least half the fish we cast to followed our flies and I actually made two eat. Since I hadn't cast to a big tarpon in at least six months I was way out of practice and coundn't stick either one hard enough. Yes, I'm making excuses.

All the tarpon we saw yesterday were big, including a couple that pushed 150 pounds. In addition to this good news the canals in Matlacha are now filling up with lots of rolling 10 pounders. I've got a couple of charters lined up this week with experienced anglers so hopefully these guys can do better than I did on the bow and we'll get some new tarpon photos over the next few days.
Posted by Capt. Gregg at 6:08 AM

Email ThisBlogThis!Share to TwitterShare to FacebookShare to Pinterest
Labels: Boca Grande, fly fishing, Matlacha, Pine Island, tarpon
Newer Post Older Post Home
Welcome to the Pine Island Angler. This blog is published from my home base on beautiful Matlacha, Florida where I run my guiding business Wildfly Charters. I started this site to provide regularly updated news about salt water flats fishing throughout Southwest Florida, the Keys, and many other Stateside and Caribbean locations. As a full time guide since 1995 I'm always looking for that next undiscovered spot or secret fly that will lead me to even better fishing and I'm happy to share what I find here on this site. I welcome any of your comments on all of my posts. Feel free to contact me with any questions by e-mail at gmckee1@hotmail.com or call me directly at (239)565-2960. Capt. Gregg McKee