The Return Of Nice Weather (For Now)

We've almost got the winter beat here on Pine Island. We just had two days where it actually got warm enough to go outside wearing shorts and the water temperatures crawled back up into the lower 70's. That meant the redfish were everywhere and the only thing that kept us from totally clobbering them was the dense fog in the mornings and high clouds in the afternoons.

I spent yesterday on the water with angler Bob Koch who splits his time between Atlanta and Matlacha. Bob is also a certified fly casting instructor so it was great to have someone on the bow who could handle any situation. Unfortunately the reds didn't want to eat flies yesterday. Bob cast at dozens of different fish using several proven patterns but no takers. We also threw as several very large snook and even though we got no hits from them either it was just great to see that some big breeders survived the cold snap. 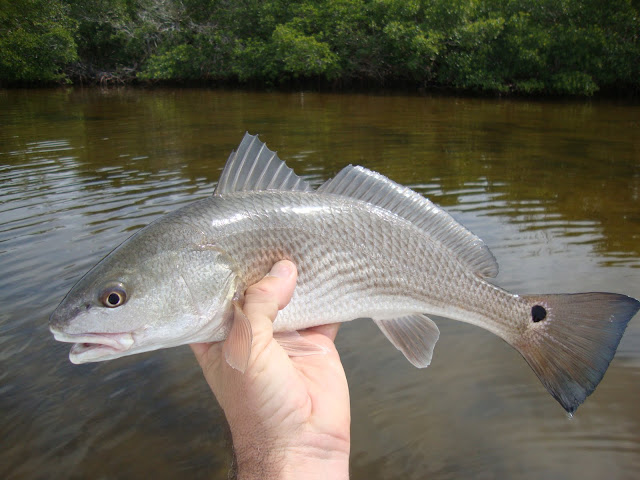 I went out for a few hours on my own this afternoon with a spinning rod and live shrimp just to be sure that the fish were eating and, bingo. This 14 inch rat red was the first fish I cast to and he ate immediately. I also landed a dozen ladyfish and a few nice trout once I switched back to casting flies.

Of course today ended with the arrival of another cold front and our temps will drop back into the upper 40's tonight but these systems are getting less severe. This won't be the last one of the winter but spring is less than a month away and the fish are back for good already.
Posted by Capt. Gregg at 3:55 PM