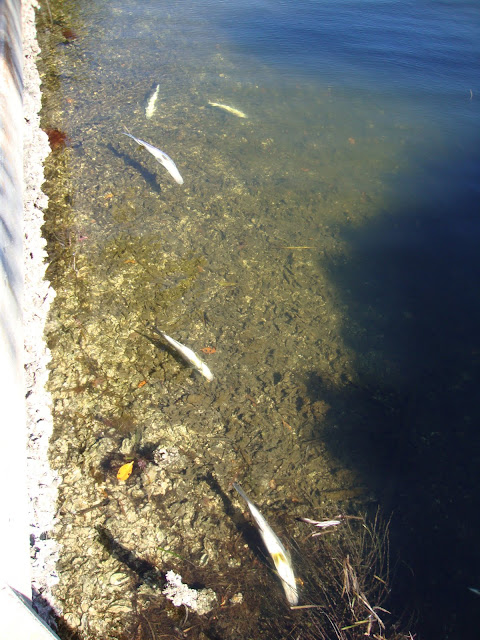 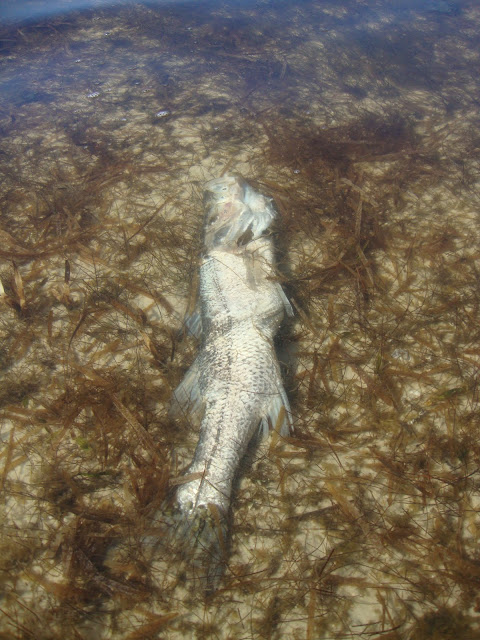 Several years ago I was running my skiff with a charter across the flats off Key West and heading towards the Marquesas. It was a rare glass calm morning and my passengers were a nice mid-western couple, a trout angler and his wife on their first trip to the ocean. We were half way to our destination when I spotted a familiar shape on the surface and throttled back to have a closer look and show my passengers their first wild sea turtle.

As soon as we idled within fifty feet of the animal I knew something wasn’t right. It was a full grown hawksbill, a very common turtle that’s also a remarkably fast swimmer. They usually take one look at a boat and then quickly dive for the bottom. This turtle was just staring straight ahead and slapping the surface with its front flippers.  It didn't take long to see that it was clearly hurt. The back of its shell was streaming a fresh trail of blood which told me that its injury had just happened.

My first thought was that another boat had hit it.  Springtime in this area sees a lot of traffic, especially the very fast kingfish boats with their big twin outboards. At 60 mph it’s hard to spot a turtle on the surface, let alone avoid hitting it.

My passengers went from extremely excited to heartbroken and concerned for the turtle's safety, so I pulled out my net and decided to haul it on board. A quick call to FWC would summon another boat and get the turtle back to one of the wildlife hospitals in the Lower Keys. At that moment I got a much better look at the turtle’s injury. A semi-circular part of its shell and an entire back flipper were missing. This was clearly no propeller strike.

I quickly shut the engine off and let the boat drift past the turtle. My passengers didn’t understand but I told them to stay still for a minute and watch. It didn’t take long until the dark shape appeared under the stricken hawksbill. The six foot bull shark, not a particularly big one, swam right up to its prey and promptly bit off the turtle’s remaining rear flipper.

That instantly sent both of my passengers into a full throttle chorus of “Holy S---!!!”

I joined in, too. This was something that I had seen on the Discovery Channel but never in real life . The bull shark turned back again on the turtle, this time biting through its shell as easily as a person would bite through a Dorito. We could actually hear the crunch. It was a shockingly clear sound on the calm water. That’s when my angler’s wife cried out to me, “Please, help it!”

I turned to look at her and she was obviously heartbroken, almost on the verge of tears. I didn’t know what to say but I knew exactly how she felt. I love sea turtles and spotting them is one of the highlights of any day on the water. I’ve visited the turtle hospital on Marathon Key and it makes me sad and angry when I see the damage that trash and discarded fishing line causes them. I was totally prepared to help this animal when I thought it was injured by a boat, but this was very different.

“Do something,” she asked me again when the shark its fourth and final bite before disappearing. The hawksbill was still alive but far beyond help at that moment. In fact, its fate was sealed well before we ever got near it.

“That’s nature,” was all I could finally say to her. I was still stunned at what we had just witnessed.

“That was awesome,” her husband responded.

He was right. It was awesome. Even though it lasted less than a minute, to this day it remains one of the most amazing things I’ve ever witnessed on the water. It was also violent, heartless, and totally necessary. Even if I was able, I wouldn't have done anything to stop it. Terrible endings like that happen constantly in nature. I tried explaining to my angler’s wife as we motored away from the doomed hawksbill that the only animals ever given the privilege of dying peacefully are humans and our pets. She stayed quiet for most of the trip so I’m not sure any of that sunk in.

I was reminded of this story recently as I stood over a Matlacha canal and watched dozens of trophy snook lying upside down in the 40 degree water after our record cold snap. Some were still alive and struggling to move but they were all dying. It was a terrible waste of so many great fish. I hated seeing it and so did thousands of other folks who make their living trying to catch them.  It was happening all over Florida that morning and we did nothing to cause it and were powerless to prevent it.  Every once in a while we have to be reminded how truly in charge Mother Nature really is, even when she does things that really hurt to watch.
Posted by Capt. Gregg at 5:44 AM

Email ThisBlogThis!Share to TwitterShare to FacebookShare to Pinterest
Labels: Pine Island, snook
Newer Post Older Post Home
Welcome to the Pine Island Angler. This blog is published from my home base on beautiful Matlacha, Florida where I run my guiding business Wildfly Charters. I started this site to provide regularly updated news about salt water flats fishing throughout Southwest Florida, the Keys, and many other Stateside and Caribbean locations. As a full time guide since 1995 I'm always looking for that next undiscovered spot or secret fly that will lead me to even better fishing and I'm happy to share what I find here on this site. I welcome any of your comments on all of my posts. Feel free to contact me with any questions by e-mail at gmckee1@hotmail.com or call me directly at (239)565-2960. Capt. Gregg McKee