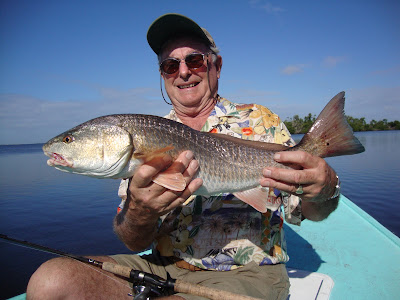 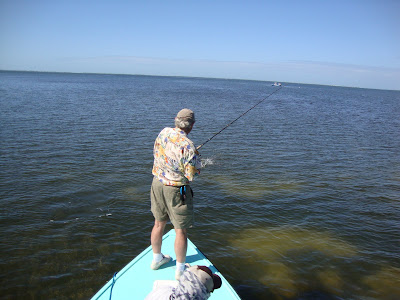 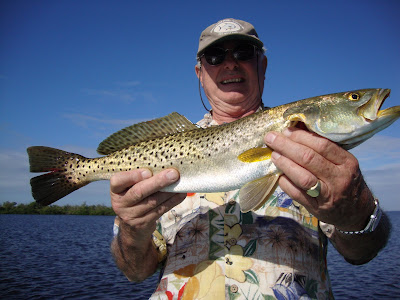 This is my buddy Wild Bill Heindl from Virginia, a long time presence on the bow of my boat from Key West to Puerto Rico and now here on Pine Island, and he's not called Wild Bill because of his loud shirts.

Bill landed a Slam with me on Wednesday but all of the fish were undersize. We wanted to get another one will all legal size species so that meant heading out to Pine Island Sound with on my buddy Capt. Joe Harley's boat.

Bill was throwing a topwater Zara Spook with a Shimano baitcaster and first landed the big trout pictured above. His second strike was the 24 inch redfish that hit the same lime green Spook. This was one of the very few reds I've ever seen with an almost spotless tail. They're also much lighter in color in the clear water of the Sound than they are in Matlacha Pass.

We really needed a big snook and found several hovering in the deeper potholes near Flamingo Bay. Bill switched to an orange DOA shrimp and hooked a big snook that was close to 30 inches. This fish was a great jumper and I tried to get some shots while it was airborne but was in the wrong spot on the platform. Just as we were bringing the snook boatside it came unhooked. Total bummer but there's some really great action out in the Sound right now.

Update: I ran out with Bill here in Matlacha Pass this afternoon and finally scored him his legal snook. This fish hit the same Zara Spook we were using yesterday and was part of a school hanging under the mangroves near the Indian Fields. 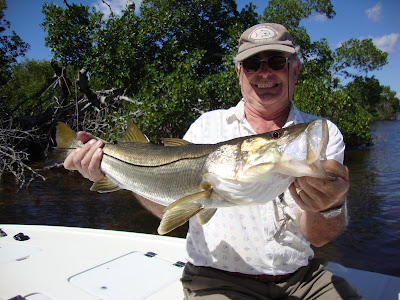 Email ThisBlogThis!Share to TwitterShare to FacebookShare to Pinterest
Labels: Pine Island, redfish, sea trout, snook
Newer Post Older Post Home
Welcome to the Pine Island Angler. This blog is published from my home base on beautiful Matlacha, Florida where I run my guiding business Wildfly Charters. I started this site to provide regularly updated news about salt water flats fishing throughout Southwest Florida, the Keys, and many other Stateside and Caribbean locations. As a full time guide since 1995 I'm always looking for that next undiscovered spot or secret fly that will lead me to even better fishing and I'm happy to share what I find here on this site. I welcome any of your comments on all of my posts. Feel free to contact me with any questions by e-mail at gmckee1@hotmail.com or call me directly at (239)565-2960. Capt. Gregg McKee