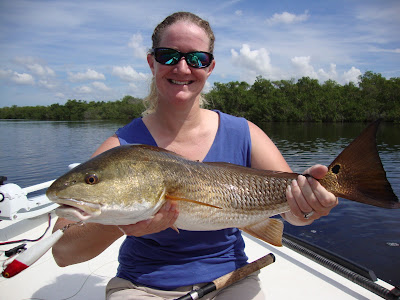 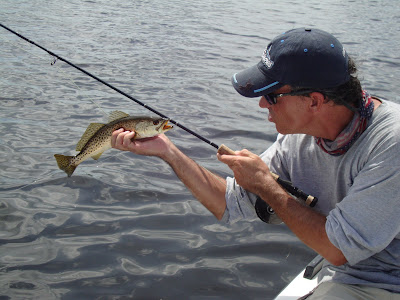 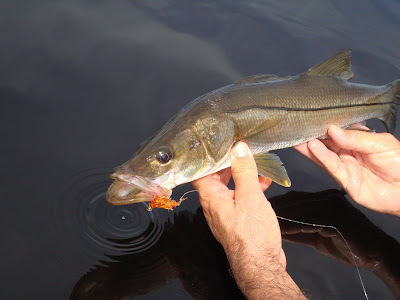 A Gulf Coast Slam, for those of you not familiar with the term, means one angler catching a redfish, snook, and sea trout all in one day. The shots above came from a quick trip I took this morning north of St. James City on Pine Island. Since my wife caught the redfish it doesn't technically count as a Slam.

Instead, this is what we call a Boat Slam. That means two or more anglers teamed up to land the three necessary species. The redfish was the only one that fell within the legal slot. Amanda hooked and landed this on a red and white Bagley Finger Mullet. I landed the snook and trout on flies and both were well short of being legal.

Slot sized redfish are still all over the place around Pine Island these days. Look for any big mullet school and you're likely to find a legal red. The one we caught above went right to the grill and the ceviche bowl.

I'm still frustrated when it comes to landing some big snook around here, even though we're almost three weeks into snook season. The one in the picture hit a new shrimp pattern tied by one of my Idaho based anglers.
Posted by Capt. Gregg at 6:53 PM

Email ThisBlogThis!Share to TwitterShare to FacebookShare to Pinterest
Labels: fly fishing, Pine Island, redfish, sea trout, snook
Newer Post Older Post Home
Welcome to the Pine Island Angler. This blog is published from my home base on beautiful Matlacha, Florida where I run my guiding business Wildfly Charters. I started this site to provide regularly updated news about salt water flats fishing throughout Southwest Florida, the Keys, and many other Stateside and Caribbean locations. As a full time guide since 1995 I'm always looking for that next undiscovered spot or secret fly that will lead me to even better fishing and I'm happy to share what I find here on this site. I welcome any of your comments on all of my posts. Feel free to contact me with any questions by e-mail at gmckee1@hotmail.com or call me directly at (239)565-2960. Capt. Gregg McKee