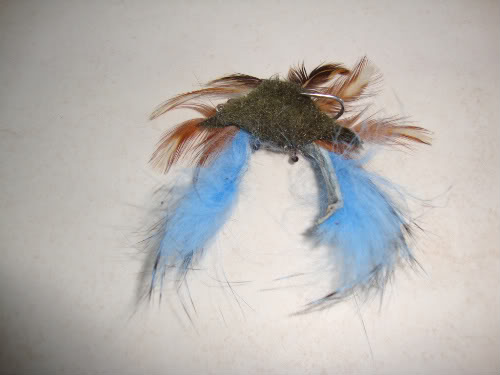 Here's a close up of the crab pattern I've been using on the big reds here in Matlacha lately. It was created by Eric Treutel of Idaho, one of my regular anglers who I've guided for bonefish and permit down in Puerto Rico. One of the benefits of living in Idaho is having a lot of free time on your hands in the winter to come up with stuff like this.

According to Eric, this fly is a total pain in the ass to put together. According to me, it's worth the hemoroids. I caught my biggest redfish of the year on it so far and plan to take it down to the Keys next week and try for a permit.

The fly is weighted with a dumbell at the eye of the hook and the felt body also conceals a glass rattle. With the rabbit strip claws this fly sinks in a perfect immitation of a blue crab diving for cover. This is the secret of most successful crab patterns. They're constructed to mimic the behavior of the crab first, and the physical appearance second.

This fly is far from perfect. In addition to being a pain to tie it's also a pain to cast on anything less than a 9 weight. Eric's working on making it smaller and easier to assemble. This is the type of pattern that would sell for $7 or more in a fly shop. If Eric gets to the point where he can tie them in less than fifteen minutes, and I can land a permit or two, we might start selling them. Obviously, I don't believe in having "secret" flies so if anyone out there wants to duplicate it and suggest some improvements please let me know. I'll post some tying instructions soon.
Posted by Capt. Gregg at 9:53 AM

Email ThisBlogThis!Share to TwitterShare to FacebookShare to Pinterest
Labels: flies, fly fishing, Matlacha, Pine Island Fishing Guides, redfish, Wildfly Charters
Newer Post Older Post Home
Welcome to the Pine Island Angler. This blog is published from my home base on beautiful Matlacha, Florida where I run my guiding business Wildfly Charters. I started this site to provide regularly updated news about salt water flats fishing throughout Southwest Florida, the Keys, and many other Stateside and Caribbean locations. As a full time guide since 1995 I'm always looking for that next undiscovered spot or secret fly that will lead me to even better fishing and I'm happy to share what I find here on this site. I welcome any of your comments on all of my posts. Feel free to contact me with any questions by e-mail at gmckee1@hotmail.com or call me directly at (239)565-2960. Capt. Gregg McKee