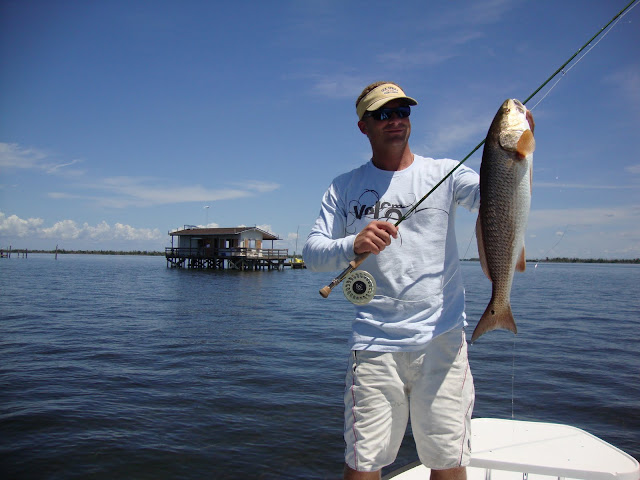 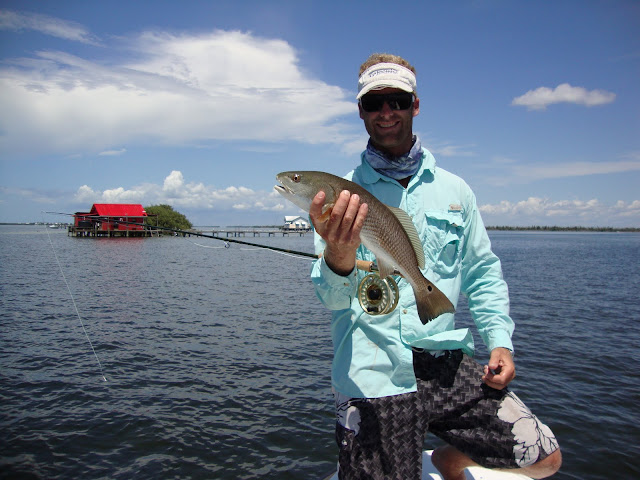 Florida anglers Matt and Shawn Kerstang came over to the Southwest coast to celebrate a buddy's bachelor party out on Cabbage Key. These guys were all hard core anglers and brought half a dozen flats boats with them, including Matt's Egret and Shawn's Beavertail BTX. Our main target was tarpon and we did get a few shots at some really small juveniles in the creeks south of Pineland but no hook ups.
What we did find in abundance were redfish on the flats over Captiva Rocks. This is one of the most scenic spots in all of Pine Island Sound and home to several historic fishing cabins. We got dozens of shots at reds in the clear water and the guys each landed one using a Merkin style crab fly. This was Labor Day Weekend and there were at least a dozen other boats fishing this same area, some of them within a few yards of us. Matt and Shawn were the only anglers using fly rods and in the hour we spent on this flat they were the only ones to land any redfish. This was really surprising given all of the commotion going on around us.
One of the keys to their success was precise casting. Redfish rely on their sense of smell more than their eyesight to find their prey. Since flies don't give off a scent it's sometimes best to put the cast within a few inches of the red's nose. This isn't easy, especially when standing on a moving deck and casting into moving target. Get it right and you'll be successful not only with redfish but just about any other saltwater species.

Email ThisBlogThis!Share to TwitterShare to FacebookShare to Pinterest
Labels: Captiva, fly fishing, redfish
Newer Post Older Post Home
Welcome to the Pine Island Angler. This blog is published from my home base on beautiful Matlacha, Florida where I run my guiding business Wildfly Charters. I started this site to provide regularly updated news about salt water flats fishing throughout Southwest Florida, the Keys, and many other Stateside and Caribbean locations. As a full time guide since 1995 I'm always looking for that next undiscovered spot or secret fly that will lead me to even better fishing and I'm happy to share what I find here on this site. I welcome any of your comments on all of my posts. Feel free to contact me with any questions by e-mail at gmckee1@hotmail.com or call me directly at (239)565-2960. Capt. Gregg McKee