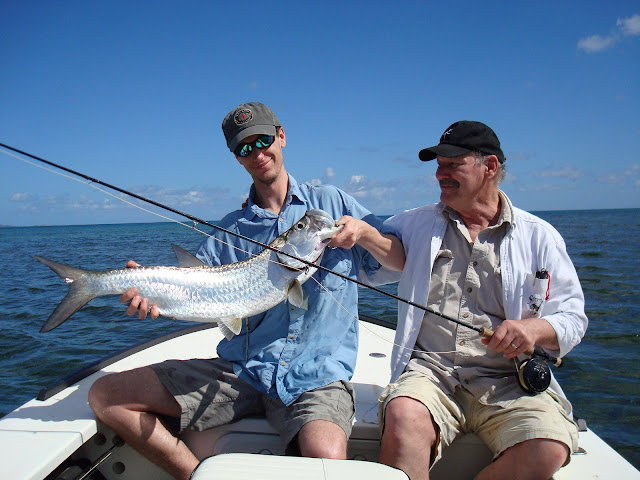 When I was guiding in Key West our local fly shop used to send me a lot of customers who never touched a fly rod before but wanted to learn the sport. This wasn’t because I was the best instructor available. In fact, I’m a self-taught caster and have no fly fishing certifications whatsoever. I simply had a reputation with the shop’s owner for not yelling at my anglers, even when they’d lobotomize me with a heavily weighted crab pattern or drive a 2/0 Owner hook deep into my calf muscle. Plus I always needed the money so I‘d take anyone they sent my way.

Getting so many unskilled anglers was sometimes tough on the ego, especially during tarpon season. We’d often come back to the dock at the end of the day and see most of the other guides and their customers high-fiving or clinking long-necks together in celebration. They’d be telling and retelling their tarpon stories while I’d look at my anglers and say something like, “Well, you learned a lot today and you‘ll be much better next time.” Then I’d try to not pick at the scabs on my right temple or the back of my calf.

Actually, I really like having beginners on my boat. Most of them are more than willing to listen and they also haven’t taught themselves any bad habits that can be really difficult to break. Just setting the hook on a tarpon with a fly rod is an act of real violence that doesn’t exist anywhere in freshwater fishing. Gently lifting the rod after the fish eats is a serious hurdle for a lot of folks who’ve started out on a trout stream. It can take several missed shots until they stop doing it. In fact, comparing trout fishing to tarpon fishing is like comparing the Tour-de-France to the Daytona 500. They’re both wheeled racing but there’s a bit of difference in horsepower.

I did actually have two different anglers manage to land tarpon without ever casting a fly before. The first beginner simply had a fish that really wanted to be caught. It was a dead calm July morning and the tarpon were rolling everywhere. I had just put the rod in my angler’s hands, explained the basics, and watched him flail away spastically like a typical first-timer. It didn’t matter. The tarpon were swimming right up to us and his fly fell in the middle of the first big school, no more than ten feet from the bow. A seventy pounder inhaled it and made a hard turn, solidly driving the hook right into the corner of its own mouth. All the jumping in the world wasn’t going to dislodge it and I had the rod rigged with a heavy 30# leader. The ninety degree water wasn’t holding a lot of oxygen and the fish wore itself out quickly. It was a miracle tarpon that we wouldn’t duplicate again that day, and my angler’s casting never got any better. At the very least I was convinced he’d become a lifetime client but I didn’t hear from him again. Maybe he figured that fly fishing couldn’t get any better than that so why not quit on a high note.

The other beginner who landed a tarpon with me was a PGA golfer who’s name I didn’t recognize. I remember that he was ranked number sixty-two on the money list at the time. After an hour on the bow he was throwing a very decent fifty foot cast, which is all you need in most situations. I started poling him down the brightest flat in the area and he was getting good shots every fifteen minutes or so. He missed a few takes but two hours later he finally struck one hard enough, cleared his line, and landed the tarpon shortly after that. By the time our trip was over he jumped two more fish and was casting almost as well as I could. It was very impressive to watch but not all that surprising coming from a professional golfer. An ESPN producer once told me that he watched Tiger Woods learn to cast flawlessly in less than five minutes.

So why was I the world’s worst golfer the one time I tried it? Golf and fly fishing are actually very similar disciplines. A good swing or cast both require coordination, timing, and finesse. But the similarities don’t stop there. Golf and fly fishing both give you the opportunity to spend lots of money on some really overpriced gear and experience all the hassles of traveling with it to some very expensive locations. Both sports give you a decent chance of getting struck by lightning. Golfers and fly fishermen also get to spend hours watching their sports on TV while boring the hell out of their non-golfing/fishing spouses. But best of all, you can become completely obsessed with both and still be lousy at them. In this case they provide you with a great excuse to throw your expensive gear down in disgust and start drinking while outdoors.

That’s probably why I never gave golf another try. I’d be dead from liver failure by now.
Posted by Capt. Gregg at 7:44 PM

Email ThisBlogThis!Share to TwitterShare to FacebookShare to Pinterest
Labels: fly fishing, Key West, tarpon
Newer Post Older Post Home
Welcome to the Pine Island Angler. This blog is published from my home base on beautiful Matlacha, Florida where I run my guiding business Wildfly Charters. I started this site to provide regularly updated news about salt water flats fishing throughout Southwest Florida, the Keys, and many other Stateside and Caribbean locations. As a full time guide since 1995 I'm always looking for that next undiscovered spot or secret fly that will lead me to even better fishing and I'm happy to share what I find here on this site. I welcome any of your comments on all of my posts. Feel free to contact me with any questions by e-mail at gmckee1@hotmail.com or call me directly at (239)565-2960. Capt. Gregg McKee