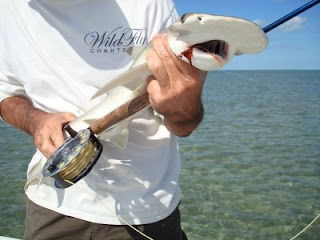 Catching sharks on a fly is great sport, but it can be a labor intensive effort involving a lot of chum, big bulky flies, and heavy fly rods. Fortunately, there’s one species that’s very user-friendly and can be caught year round throughout South Florida.

The bonnet head shark is the smallest of the hammerhead family and rarely grows over three feet in length. They’re crustacean eaters and you’ll find them on any shallow flat in the South Florida. The bonnet head is so common and easy to catch that guides often call them the “Poor-man’s Bonefish.”

Toss a live crab or shrimp across the nose of a bonnet head shark and you’ll get an immediate take. Like most sharks, their sense of smell is unreal but their eyesight is rather poor. Getting them to take something that doesn't produce a scent, such as an artificial lure or a fly, is a lot more difficult, unless you’re using the right color.

Years ago I picked up a package of rabbit fur strips dyed in a color called Crawfish Orange. It was a little too unnatural looking for tying bonefish patterns but I thought the tarpon would love it. They didn’t, but one morning I asked an angler cast one of these Crawfish streamers at a cruising bonnet head just for target practice and the shark went nuts attacking the fly. I’d never seen one react that way to anything other than live bait.

Since bonnet heads have small mouths and like to pin their prey to the bottom, I tied up a weighted Crawfish Orange shrimp pattern on #4 hooks and instantly started catching these sharks left and right. I also found out that bonefish love the color just as much, and now this color fly is almost all I use in both the Keys and Puerto Rico.

A standard 7 or 8 weight bonefish outfit is perfect for bonnet head sharks and fifteen pound fluorocarbon is all the tippet you’ll need. Their teeth are sharp but their small mouth usually doesn’t reach the eye of the hook. Just be sure to use a pair of pliers or forceps when unhooking them.

Bonnet heads are not a glamour species, but their “poor-man’s bonefish” nickname is well deserved. You can sight cast to them all year from here around Pine Island down to the Keys, even when it’s too hot or cold for everything else. They don’t spook easily and will tolerate a lot of bad casts. This makes them an excellent species for beginning anglers. Ten pound bonnet heads are not uncommon and they can burn off a lot of fly line in a few seconds once hooked.

You can find these sharks on the shallows almost everywhere, even in places where the crowds and jet skis chased away the redfish or bonefish years ago. This is one species that you’ll have a realistic chance of hooking in South Florida without using a guide. Pick a good looking flat on the downwind side of US-1 and look for the light grey dorsal fin cutting through the surface. Drop a Crawfish Orange fly on their nose and you’ll be off to the races.
Posted by Capt. Gregg at 10:12 AM

Email ThisBlogThis!Share to TwitterShare to FacebookShare to Pinterest
Labels: fly fishing, sharks
Newer Post Home
Welcome to the Pine Island Angler. This blog is published from my home base on beautiful Matlacha, Florida where I run my guiding business Wildfly Charters. I started this site to provide regularly updated news about salt water flats fishing throughout Southwest Florida, the Keys, and many other Stateside and Caribbean locations. As a full time guide since 1995 I'm always looking for that next undiscovered spot or secret fly that will lead me to even better fishing and I'm happy to share what I find here on this site. I welcome any of your comments on all of my posts. Feel free to contact me with any questions by e-mail at gmckee1@hotmail.com or call me directly at (239)565-2960. Capt. Gregg McKee